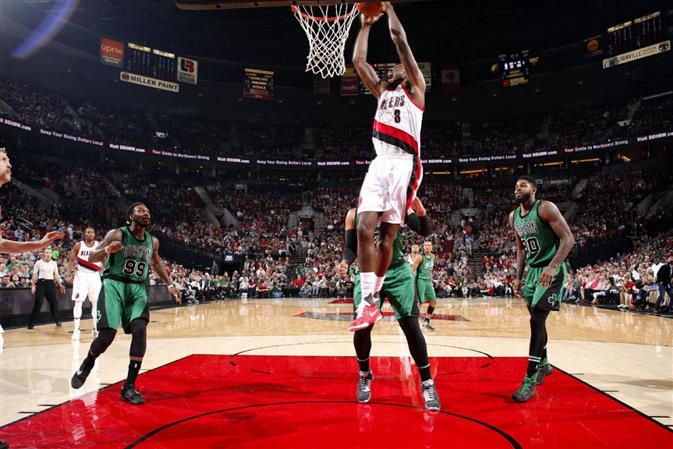 Al-Farouq Aminu #8 of the Portland Trail Blazers goes for the dunk during the game against the Boston Celtics on March 31, 2016 at the Moda Center in Portland, Oregon. (Yahoo Photo)

Portland: Al-Farouq Aminu scored a career-high 28 points, including a career-best six 3-pointers, and the Portland Trail Blazers extended their winning streak at home to a season-high six games with a 116-109 victory over the Boston Celtics on Thursday night.

With only six regular-season games remaining, Portland (40-31) holds the sixth seed in the West. Boston (39-37) entered as the East's fourth seed, but fell to sixth with the loss.

CJ McCollum added 17 points and Damian Lillard had 14 for Portland, helping to avenge a 116-93 blowout loss to the Celtics two weeks ago in Boston.

Isaiah Thomas led the Celtics with 22 points. Jae Crowder returned to the court after missing the last eight games with a sprained ankle. He didn't miss a beat, sinking a big 3-pointer with 1:08 left to give the Celtics a one-point lead.

McCollum answered with a tough fadeaway jumper to reclaim a 110-109 lead with 1:04 remaining. Allan Crabbe's steal on the next possession led to a dunk by Aminu with 49.2 seconds left. Boston couldn't catch up.

Portland trailed by as many as 12 in the third quarter, only to rally for a 13-point lead in the fourth.

Aminu was the Blazers' lifeline in the third, scoring 12 points and matching his career high of 20 points on a dunk, sparking Portland. Crabbe's 3-pointer and a rebound basket by Ed Davis capped the Blazers' 10-0 run, tying the game at 81 and bringing the crowd to its feet.

With Lillard on the bench to start the fourth, the Blazers took over.

Lillard re-entered the game with 6:35 remaining and Portland's lead began to dwindle after Ed Davis fouled out with four points, seven rebounds, three steals and two assists. The Celtics were able to close the gap to two with just over 3:25 to go.

With the crowd chanting "MVP," Lillard made two free throws to ice the win.

The Blazers were lifeless early, going scoreless for the first three minutes. Lillard struggled in the first, scoring only six points, and going 0 for 3 from deep range. Portland was able to take the lead briefly off a 3-pointer from Maurice Harkless with just over three minutes remaining in the first.

The Celtics' stellar defence, highlighted by a 7-0 run to start the second quarter, allowed them to build a 58-54 lead at the half. Thomas led all scorers with 13 points at the break.

Celtics: Have a two-game streak against the Blazers and were looking for their first sweep of Portland since the 2010-11 season.

Trail Blazers: Lillard had scored at least 20 points in the Blazers' last two meetings with the Celtics. ... The Blazers are still adjusting to the loss of Meyers Leonard, who will miss the remainder of the season after undergoing shoulder surgery.