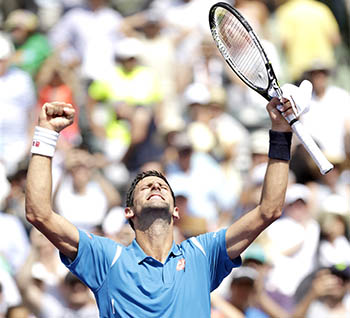 Djokovic celebrates his win against Goffin

The 28-year-old Serbian will try to match the career record of six Miami crowns won by Andre Agassi by capturing his third consecutive title at the hardcourt event tomorrow against the winner of a later match between Japanese Kei Nishikori and Australian 24th seed Nick Kyrgios.

“It’s a privilege just to be mentioned alongside Andre Agassi,” Djokovic said.

Djokovic won his 15th consecutive Miami match and the 29th of his past 30, but only after winning a tense tie-breaker and taking the only break of the second set.

“It was an extremely tough and challenging match physically for both of us,” Djokovic said. “We started solid, many exchanges from the baseline. It was very close. It could have gone either way.”

Djokovic improved to 27-1 on the season, which has included his 11th career Grand Slam title at the Australian Open and titles at Doha and Indian Wells.

He could claim the Miami-Indian Wells double for the third year in a row and his 63rd career title on Sunday.

Squared 4-4 in the tie-breaker, Goffin hit an overhead smash that Djokovic sent back as a lob inside the far baseline to keep the point alive and later took full advantage by winning it with a forehand drop volley winner.

Goffin hit a forehand wide to give Djokovic two set points, then saved one on a drop volley winner but lost the set when the ball deflected off the edge of his racquet as he leaped to reach another Djokovic lob.

In the second set, Goffin netted a backhand to hand Djokovic a break for a 4-3 edge and the world number one held twice to triumph after two hours and five minutes.

Djokovic has reached the final in 19 of his past 21 events and in 11 consecutive ATP Masters Series events. He could win a record 28th ATP Masters crown, surpassing the mark he now shares with Rafael Nadal.

Goffin, 25, fell to 0-4 against Djokovic but will jump to a career-best 13th in next week’s rankings.

Djokovic has a 6-2 career edge on Nishikori, including a victory in this year’s Australian Open quarter-finals, but has never faced Kyrgios.

Nishikori, who won his fourth consecutive Memphis title in February, beat Kyrgios last October at Shanghai in their only prior meeting.

Nishikori, 26, seeks his second ATP Masters final, the other coming in 2014 at Madrid.

The Aussie prodigy, who won his first ATP title in February at Marseille, was seeded 24th, the lowest mark for a Miami semi-finalist since Nadal at 29th in 2005.