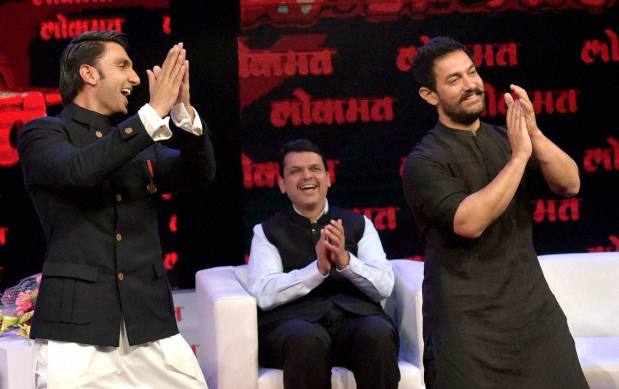 Actor Ranveer Singh was conferred with `Maharashtrian of the Year' honour, while queen of melody Asha Bhosle was presented Lifetime Achievement Award at an event here.

The award, constituted by Lokmat Group, was bestowed on the 30-year-old Bollywood star by Maharashtra Chief Minister Devendra Fadnavis. Superstar Aamir Khan was guest of honour at the event.

On the occasion, Ranveer joked this was the first time he met Aamir at an award function (he is known to shun such events) and said he gave his best to portray the iconic character on screen.

"This is the first award function where I met Aamir Khan... Thank you for this honour. When Sanjay Leela Bhansali offered me `Bajirao Mastani', I understood that I had to essay the life of such a great warrior, I said to myself that I will perform from my heart and soul to try and make a significant mark," Ranveer said.

"Bajirao Mastani gave me a sense of belonging. When I used to tell my Maharashtrian friends about the role there was an immense sense of pride they had."

The "Band Baaja Baarat" actor then danced with Aamir to the tunes of his song "Malhari" from "Bajirao Mastani".

Asha was given the Lifetime Achievement Award at the event. The 82-year-old legendary singer said she was very proud to receive the honour.

"This is the most important award for me. I've been singing for years and not only Maharashtrian but people across the country have loved me. I feel grateful receiving this honour at the hands of our Chief Minister."

Cinematic legends like Amitabh Bachchan and Dilip Kumar have been honoured with this award in the past.