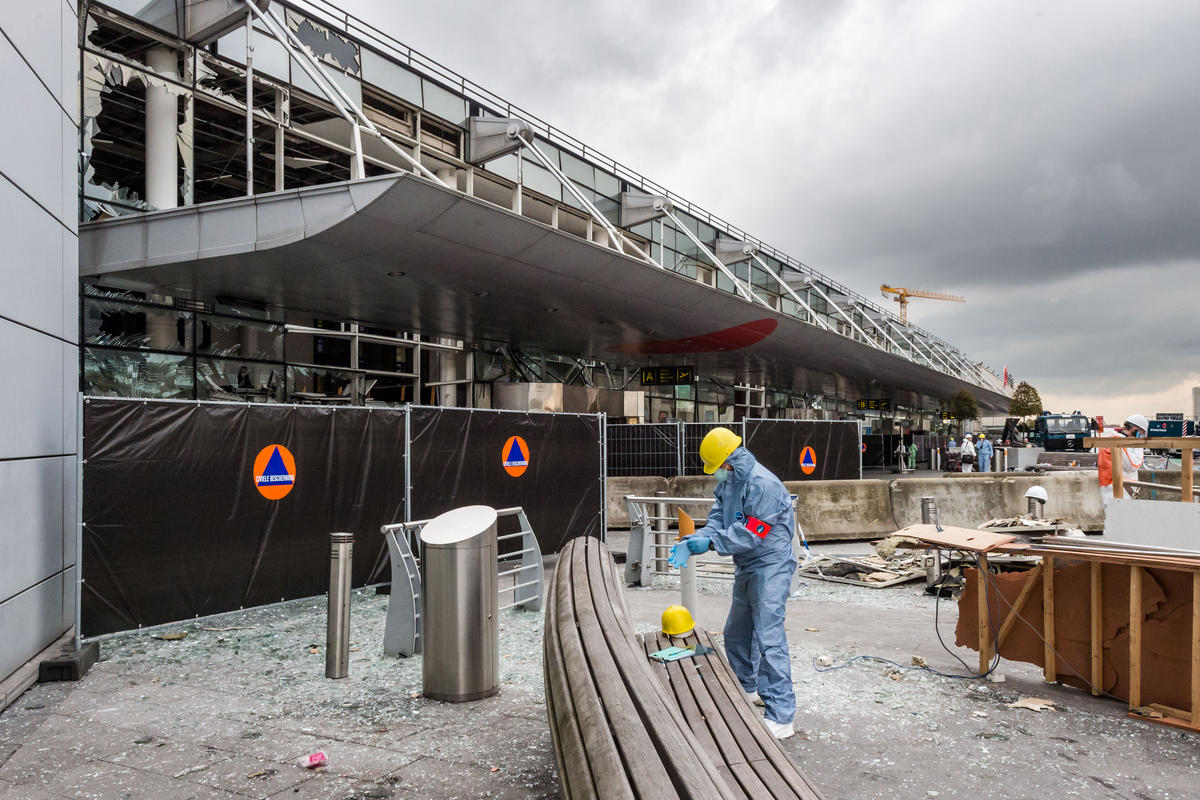 A forensics officer works in front of the damaged Zaventem Airport terminal in Brussels. It's unclear when the Brussels Airport will reopen, even after a meeting Friday, April 1 by Prime Minister Charles Michel and key members of the government. (AP Photo)

Brussels: Struck by suicide bombers 10 days ago, the airport known as "the heart of Europe" has stopped beating temporarily, causing headaches for thousands of business and vacation travelers, and painful financial losses for Belgium's capital and tourism industry.

It's still unclear when Brussels Airport will reopen. But a key hurdle appeared to have been cleared on Friday evening when police unions, which had threatened a strike, reached a preliminary deal with government negotiators on how to bolster security to minimize more violence.

The agreement, which must be formally approved by both sides, calls in part for hiring 200 additional airport police officers, said Stephane Deldicque, an official with the CSC Public Service Union.

A Belgian government official, speaking on condition of anonymity because he was not authorized to make public statements, told The Associated Press things now appeared on track for passenger service to resume at a reduced level on Sunday morning.

Patrick Bontinck, general manager of Visit Brussels, the official municipal tourist organization, said hotel reservations have dropped by half since the March 22 attacks at the airport and the Brussels Metro, meaning a loss of 8,000-10,000 visitors a day to the city that is home to the headquarters of the European Union and U.S.-led NATO alliance, and styles itself as 'the capital of Europe.'

One cause for the drop in business, Bontinck said, is the suspension of the 600 daily passenger flights to and from the Brussels Airport, transporting more than 1.5 million passengers in February.

But he said there has also been an overall 'decline in image' for Belgium's capital, a popular destination for lovers of beer, chocolate and Flemish art and architecture.

The city has been identified in countless international media accounts as a hotbed of Islamic radicalism.

Brussels may not be the only capital to be suffering economic consequences from the bloodiest explosion of extremist violence in Belgium since World War II.

Bontinck said figures received by his office indicated hotel reservations over the same period dropped 35 percent in Paris, 38 percent in Berlin and 29 percent in London.

"The impact is general," he said.

TUI Belgium, one of Belgium's biggest tour operators, said the attacks came at a tough time for the industry: just days before the two-week Easter school vacation.

The company said that it only canceled one flight from Brussels Airport, on the same day two suicide bombers struck the departure hall, killing 16 people. A separate suicide bomber in a Metro train killed another 16 people.

TUI spokeswoman Florence Bruyere said a convoy of buses was quickly put in place, running travelers to and from Brussels to another airport on the North Sea coast at Ostend.

"We were all shocked and shaken by the attacks, but life continues. Family holidays are really important," she said. "People have made plans, they've made reservations, and they really want to head off on vacation."

According to Eurocontrol, the European agency for air traffic control, since the suspension of passenger service, some airlines, like TUI, have been using smaller airports in Belgium, including at Liege, Charleroi and Antwerp, while other carriers are shuttling passengers to and from Brussels by bus from major European air hubs like Frankfurt.

But many travelers have been inconvenienced. Three groups of 17 students and three adult chaperones from Freed-Hardeman University in Henderson, Tennessee, on spring study programs were supposed to rendezvous in Brussels the day of the bombings.

Instead, the group flying in from Athens was diverted to Duesseldorf, Germany, their colleagues in Spain had to wait a day and fly to Frankfurt, and students who expected to travel to Brussels by train from London had to go to Frankfurt by jet as well.

"It took us 48 hours to get all the kids back together," said Barbara England, chairman of the university's Department of Fine Arts.

Organizers decided to cut the semester short, but due to the continuing travel disruptions caused by the Brussels attacks, she said, "it took us a week to get back to Tennessee."

Feist said he hopes terminal areas heavily damaged by the bombs can be rebuilt in time to restore full capacity by the onset of summer vacation season.

According to airport officials, the arrivals area was only slightly damaged, and passengers flying into Brussels will go through the usual baggage claim and other procedures.

Bruyere said her company has no idea when the facility will reopen but "hopes to recommence as soon as possible."

"We are just starting the travel high season now," she said. "July and August are really important months for us."

The Brussels attacks were claimed by the Islamic State group. In the city center, a multifaith wreath-laying ceremony was held Friday to demonstrate Belgium's unity in the face of the extremist violence.

"We want to send the message that we are one indivisible people: Muslim, Jew, Christian, and other," said Salah Echallaoui, president of an umbrella group for government-authorized mosques and Islamic organizations.

"We have always lived in harmony," said Albert Guigui, Brussels' chief rabbi. "This is why we are here together, to show that there is no tension between Jews and Muslims."

In Maastricht, Netherlands, a joint funeral was held for a Dutch brother and sister killed at the airport as they were flying back to New York where they lived.

Alexander Pinczowski, 29, was on the phone with his mother when a bomb detonated and the line went dead. Sascha Pinczowski, 26, was a 2015 graduate of Marymount Manhattan College with a degree in business.

The EU's police coordination agency Europol said it held a joint operational meeting Friday with Belgian Federal Police to exchange information about the operating methods of the bombers and also support follow-up inquiries in other countries.