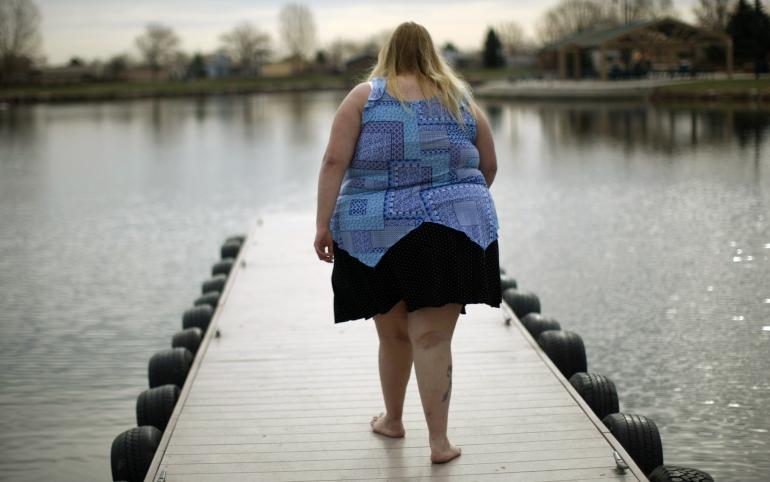 A photo of a woman with obesity (Reuters Photo)

Women who were overweight as adolescents are more likely than others to have symptoms of depression at age 65, especially if they were raised in low-income families, according to a new study.

The same wasn't true for men, however.

“The most surprising result may be the difference in the relationship between adolescent overweight and later life depressive symptoms by gender,” said lead author Melissa L. Martinson of the University of Washington in Seattle.

About 40% of the teens seemed to be normal weight, 36% were at risk for being overweight, 10% were overweight and 10% were underweight. By age 65, one third were obese, with 18% of men and 32% of women at a normal weight. Most were in generally good health, with low rates of drinking, smoking and inactivity.

Depression symptom scores were twice as high at age 65 for women who had been overweight in high school than for those who had been normal weight, even after accounting for adult weight status and other health factors.

Those who had been underweight or at risk for being overweight did not have higher rates of depression compared to those who had been normal weight, the authors reported online March 13 in Age and Ageing.

Obesity at age 65 was also tied to a higher rate of depressive symptoms for women, but not for men.

“We are unable to directly assess the reasons behind the gender difference in the results in this study, but previous research may provide some clues,” Martinson told Reuters Health by email. “The social stigma of adolescent overweight and the resulting low self-esteem may be more damaging to girls than to boys, especially girls from lower socioeconomic status families.”

She and her coauthor also found that women who were overweight in high school and obese at age 65 were at the greatest risk for depressive symptoms.

“It has been known for some time that depression in adolescence is associated with weight gain as an adult,” said Kristy Sanderson of the Menzies Institute for Medical Research in Hobart, Australia, who was not part of the new study. “This will at least in part be explained by how strongly weight status tracks throughout life; once you become overweight or obese you are very likely to stay that way.”

“As depression and overweight/obesity are essentially life-long conditions, it is then not surprising that their association would persist over the life course,” she told Reuters Health by email.

Research suggests that women who do not meet conventional standards of beauty and attractiveness experience social and economic penalties, according to Christy M. Glass, a sociologist at Utah State University in Logan who was also not part of the new study.

“Overweight adolescent girls may be excluded from friendship and dating networks that privilege thinness, and later in life overweight women may face bias and negative stereotypes from peers, potential dating partners, colleagues and even employers,” Glass told Reuters Health by email.

“Older women and their doctors may benefit from discussing weight status over the life-course, rather than simply current weight status, when working together to plan a course of treatment for health and mental health well-being,” Martinson said.