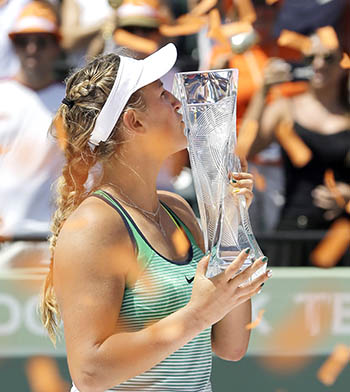 Azarenka, who also took the trophy in 2009 and 2011, won her 20th career title and third of the year after Brisbane in January and two weeks ago at Indian Wells, where she beat top-ranked Serena Williams in the final.

“I have so many great memories here,” said Azarenka. “It’s always a pleasure to come here. Hot tennis is amazing this month.”

The 26-year-old from Belarus became only the third woman to sweep the Miami-Indian Wells double in the same season, after Steffi Graf in 1994 and 1996 and Kim Clijsters in 2005.

Azarenka will jump from eighth to fifth in the world rankings on Monday, her first time in the top five since March 2014.

Meanwhile, Serbian world number one and defending champion Novak Djokovic will face Japan’s Kei Nishikori on Sunday (early Monday morning in Bahrain) in the ATP and WTA Miami Open final after straight-set triumphs on Friday in which both were tested.

The 28-year-old Djokovic will try to match the career record of six Miami crowns won by Andre Agassi by capturing his third consecutive title at the hardcourt event.

Djokovic has a 6-2 career edge over Nishikori, including five wins in a row, most recently in this year’s Australian Open quarter-finals.