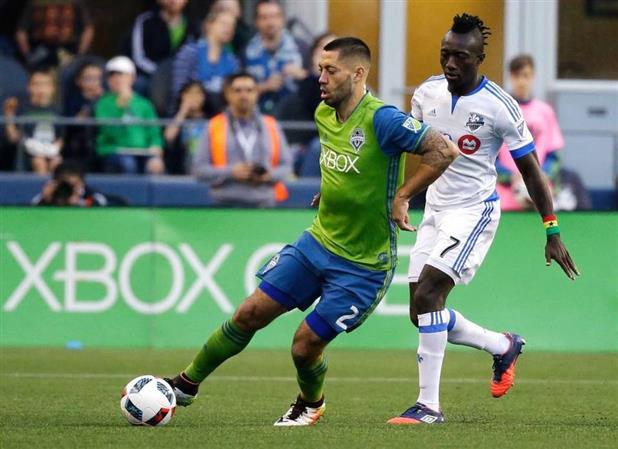 Seattle: With the way the first month of the season has gone for the Seattle Sounders, it likely wasn't going to be a memorable goal that finally led to their first points of the season.

Seattle became the final team in MLS to earn a point this season thanks to Clint Dempsey's header in the 79th minute that gave the Sounders a 1-0 win over the Montreal Impact on Saturday night.

Seattle (1-3-0) was on the verge of going winless in its first four matches — three of those at home — until Dempsey picked up his first goal of the season. The goal came off a corner kick from Andreas Ivanschitz, catching Montreal goalkeeper Evan Bush too far off his line as Dempsey was able to come free at the back post.

It was just the third goal of the season for Seattle. And it was a relief for the Sounders as the lack of scoring from Seattle's offensive stars has been one of the early surprises in the first month of the season.

"Certainly we need to still get better," Schmid said. "I think our ability to keep possession in the final third has gotten better from week to week but we need to get better in terms of finishing."

Montreal (2-2-0) started the night tied for the lead in the Eastern Conference, but lost its second straight and struggled to break down Seattle's defence with forward Didier Drogba not making the trip to play on Seattle's artificial surface. The Impact had 11 shots but only four forced Seattle goalkeeper Stefan Frei to make a save.

"Obviously, Drogba is an important player on our team. He brings a different dynamic to this club," Montreal coach Mauro Biello said. "With (Drogba) up top holding balls for us, it makes a big difference, for sure, especially the way we want to play and the attention he's going to pull when he plays. We've accepted that fact. Now it's about moving forward, and he'll be ready in the next couple weeks."

Seattle altered its lineup for the first time this season bringing Jordan Morris off the bench after spending the previous two weeks with the U.S. under-23 team in their failed attempt to qualify for the Olympics. Seattle also rested defender Joevin Jones after a stint with Trinidad and Tobago in World Cup qualifying. Jones played the final 15 minutes after an injury to Dylan Remick.

With Morris resting, Seattle went with Aaron Kovar up top with Nelson Valdez and Dempsey but the trio was unable to create many chances. Until Dempsey's goal, the best opportunity for Seattle came in the opening seconds of the match when Valdez raced onto a loose ball in the penalty area, only to see the shot saved by Bush.