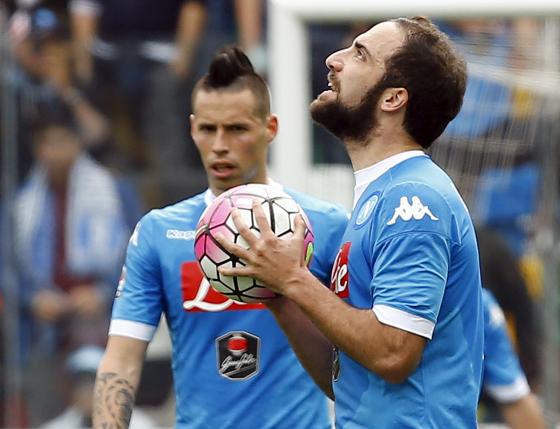 Milan: Gonzalo Higuain scored his 30th league goal of the season but was later sent off and had to be restrained by his team mates as Napoli lost 3-1 at Udinese on Sunday, severely denting their Serie A title hopes.

The Argentine appeared to push the referee in the chest after being shown his second yellow card in the 75th minute and, overcome with rage, lashed out at team mates and Napoli officials as they ushered him off the field.

Midfielder Bruno Fernandes converted one penalty, missed another and scored with an overhead kick for Udinese while Napoli dropped six points behind leaders Juventus, who beat Empoli 1-0 on Saturday, with seven matches to play.

Higuain, whose second yellow card was given for what appeared to be an innocuous challenge on Felipe, may now face a lengthy ban which could prove fatal to Napoli's hopes of a first title since 1990.

Napoli also had coach Maurizio Sarri sent off for dissent in the first half and he watched the game from the stands, quietly smoking.

Udinese went ahead after 14 minutes when Fernandes converted a penalty with a shot which went under Gabriel's arms as the Napoli goalkeeper dived to his right.

Higuain equalised 10 minutes later with a piledriver of a shot, but Udinese were given another penalty almost immediately, this time after Faouzi Ghoulam tripped Silvan Widmer.

Fernandes again sent the ball to Gabriel's right but this time the goalkeeper, standing in for injured Pepe Reina, saved the shot.

Gabriel turned villain, however, in first-half half stoppage time when he lost control of the ball and chased Duvan Zapata out of the area. The Colombian crossed into the centre and Fernandes turned the ball into an empty net with a bicycle kick.

Cyril Thereau volleyed the third just before the hour as the Napoli defence was caught napping.