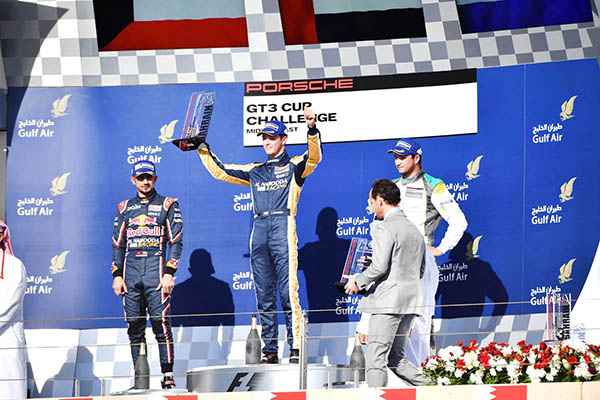 winners on the podium

JEFFREY Schmidt and Pepe Oriola both secured impressive doubles yesterday in their respective championship series, held in support of the 2016 Formula One Gulf Air Bahrain Grand Prix at Bahrain International Circuit in Sakhir.

After both drivers won their first races of the weekend on Saturday, Schmidt made it two-for-two in in the Porsche GT3 Cup Challenge Middle East while Pepe Oriola sealed a clean sweep for the season-opening round of the 2016 TCR International Series.

In the Porsche GT3 Cup, Schmidt started from the front row alongside Zaid Ashkanani. He powered to the lead right away and did well to build a significant gap en route to taking the chequered flag in 20 minutes 52.530 seconds.

Pole-sitter Ashkanani trailed in third place for much of the race, but managed to overtake Charlie Frijns on the final lap to secure the runner-up classification 8.700 seconds behind Schmidt. Frijns had to settle for third 9.122s back. All three top placers were also one through three in the Gold category.

In the TCR International Series, Oriola started from sixth position.

Classified as runner-up was Briton James Nash, who was also in a SEAT Leon and was just 1.572 seconds behind; while in third place driving a Honda Civic was Aku Pellinen 4.372s back.

Meanwhile, Bahrainis Shaikh Salman bin Isa bin Ebrahim Al Khalifa and Hussain Karimi ended their debut weekend in the TCR series with solid performances in race two. They narrowly missed out on a place in the top10, finishing 11th and 12th, respectively.

The TCR International Series now heads to Estoril in Portugal for the second round of the season, to be held on April 24.