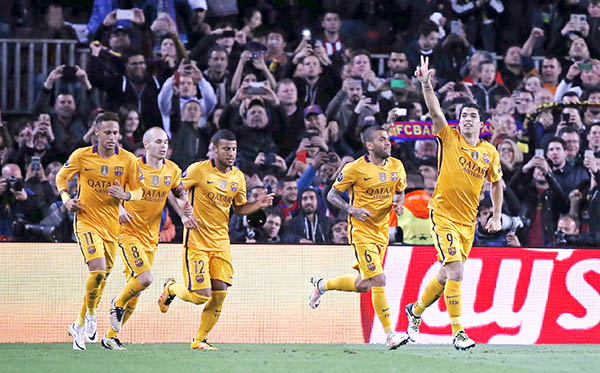 Bayern Munich will take a slender advantage into the second leg of their quarter-final against Benfica after Arturo Vidal’s early goal gave them a 1-0 win.

Vidal headed home after two minutes but Benfica’s defence stayed resolute on a frustrating evening for the hosts.

Five-times European champions Bayern had found goals easy to come by in the Champions League this season, blasting 18 in their four home matches, but came up against a solid Benfica rearguard as they pushed to extend their advantage.

Bayern striker Robert Lewandowski had a superb chance to add a second in the dying stages but bizarrely opted to try and pass to Philipp Lahm when through on goal and it was wasted.

Torres got Atletico off to the perfect start as he slotted home Koke’s through ball for a vital away goal on 25 minutes, but saw two quickfire yellow cards to leave his side a man short for over an hour.

A second-half onslaught from Barca ensued and Suarez turned the game on its head as he bundled home to equalise before powering in a header for the winner 16 minutes from time.

The sides meet once more to decide who will progress to the semi-finals at Atletico’s Vicente Calderon on April 13.

Barca had been beaten for the first time in 39 games stretching back six months by Real Madrid on Saturday and were again far from their best as Atletico looked comfortable until Torres was given his marching orders 10 minutes before half-time.

Lionel Messi was looking for his 500th career goal for club and country, but was unusually wayward as he pulled a shot beyond the front post and then miscued wildly on the volley from Jordi Alba’s dangerous cross.

Atletico boss Diego Simeone had been brave in his search for an away goal by naming Yannick Carrasco alongside Torres and top-scorer Antoine Griezmann in attack.