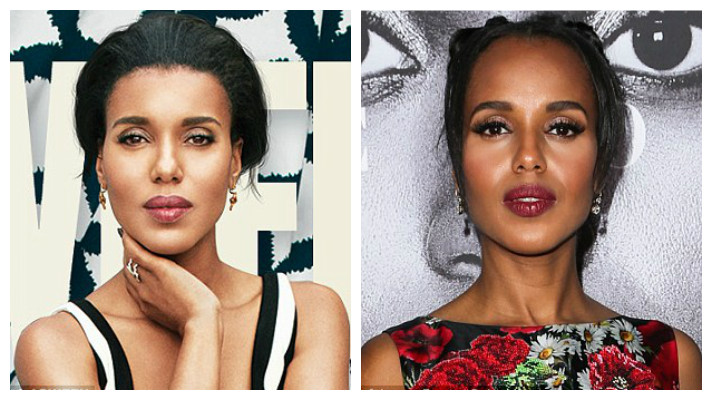 Kerry Washington is featured on the cover of the April 4th edition of AdWeek but she doesn’t quite look herself. In a gracious Instagram post The “Scandal” called out the publication for its heavy-handed editing, admitting that she felt 'weary' when she first saw the 'unfortunate' final cover shot.

Washington wrote alongside the image, “I have to be honest… I was taken aback by the cover. Look, I’m no stranger to Photoshopping. It happens a lot. In a way, we have become a society of picture adjusters – who doesn’t love a filter?!?” She went on, “And I don’t always take these adjustments to task but I have had the opportunity to address the impact of my altered image in the past and I think it’s a valuable conversation.”

Upon seeing the cover, which features the actress seated in a black and white striped dress, she explained that she was uneasy with the digital changes the magazine had made. “I just felt weary. It felt strange to look at a picture of myself that is so different from what I look like when I look in the mirror. It’s an unfortunate feeling,” Washington continued in her post. “That being said. You all have been very kind and supportive. Also, as I’ve said, I’m very proud of the article.”

The actress’ unhappiness over the cover was in contrast to her initial feelings about being asked to appear on the magazine. “When they invited me to do a cover, I was excited and thrilled. And the truth is, I’m still excited. I’m proud of the article. And I like some of the inside images a great deal,” she explained. She concluded her message with, “Thank you for being patient with me while I figured out how to post this in a way that felt both celebratory and honest.”

AdWeek’s Editorial Director James Cooper has since released a statement in response:

Kerry Washington is a class act. We are honored to have her grace our pages. To clarify, we made minimal adjustments, solely for the cover’s design needs. We meant no disrespect, quite the opposite. We are glad she is enthusiastic about the piece and appreciate her honest comments.

Kerry's post comes one day after the publication of the cover and the accompanying photoshoot which featured within the magazine's pages, and her complaint follows on the heels of hundreds of furious social media posts from her fans, in which they have hit out at Adweek for making the star look so different on the cover.

Indeed, when compared to the images featured inside the publication, it is easy to see how different Kerry looks on the cover shot, both in terms of her facial features, and the color of her skin, which looks much lighter on the featured cover shot than it does in any of the other images.

In her Instagram post, which was shared on Tuesday afternoon, Kerry took the time to thank her fans for their support in light of the controversial cover, saying: 'You all have been very kind and supportive.'