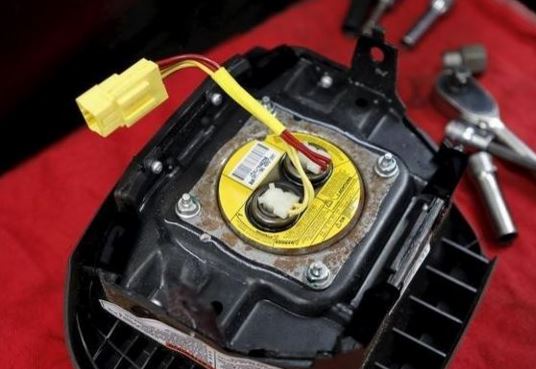 A recalled Takata airbag inflator is shown after it was removed it from a Honda Pilot at the AutoNation Honda dealership service department in Miami, Florida June 25, 2015. (Reuters Photo)

Washington: Honda has confirmed another death involving a Takata airbag, bringing the global total to 11 fatalities in a scandal that has set off the biggest auto recall in US history.

The latest death came last week when a 17-year-old Texas teenager died from injuries sustained after her 2002 Honda Civic collided with another car, activating the defective airbag.

Honda's US unit on Wednesday confirmed the death, which is the 10th reported in the United States while another person was killed after an accident in Malaysia.

The Japanese automaker said it had sent multiple letters advising that the car should be brought in for repairs, but it was never fixed.

"During an inspection...American Honda confirmed that the Takata driver's airbag inflator ruptured in the crash of a 2002 Honda Civic on March 31, 2016...resulting in the tragic death of the driver," Honda said in a statement.

Tokyo-based auto parts giant Takata is struggling to deal with a defect that can cause the airbag to deploy with explosive force, sending metal and plastic shrapnel from the inflator canister hurtling toward drivers and passengers -- in some cases killing them or causing grisly injuries.

Takata's embattled shares have been savaged since the scandal broke in 2014. The firm has been hit by lawsuits and regulatory probes over claims it covered up the defect for years.

The stock plunged 20 percent in one session last month after Bloomberg News said its airbag-recall costs could reach an eye-watering 2.7 trillion yen ($24 billion).

Takata and its automaker clients, including top client Honda, are still hashing out how the costs would be shared, Bloomberg said, citing an unnamed source.

Some 50 million Takata airbags have been recalled globally, including about 28 million in the United States with tens of millions more recalls expected.

Investigators increasingly suspect that the chemical used to inflate Takata airbags can be unstable, especially under constant heat and humidity conditions, and cause the inflator canister to rupture.