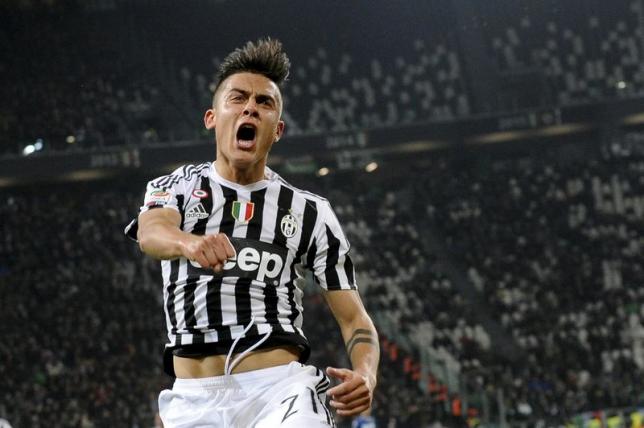 Milan: Injury-hit Juventus star Paulo Dybala is set to miss the trip to AC Milan on Saturday where the champions can take another step towards a record-equalling fifth consecutive title.

Dybala, who is Juve's top scorer with 14 league goals this term, has been sidelined since March 20 when he crumpled to the ground in pain after taking a free-kick in a 4-1 derby win at Torino.

He was diagnosed with a right thigh strain, an injury which robbed him of the chance to play for Argentina in his native city of Cordoba last week when the hosts beat Bolivia in a 2018 World Cup qualifier.

Dybala has been training apart from the rest of Juve's squad this week in a bid to regain match fitness, but reports say the striker will not be fully match fit until Juve welcome Palermo to Turin next week.

In Dybala's absence, Juve coach Massimiliano Allegri will be expected to deploy Alvaro Morata and Mario Mandzukic up front a week after the latter hit the winner in a 1-0 win over Empoli.

The win, coupled with Napoli's shock 3-1 defeat to Udinese, left the Bianconeri with a six-point lead and one hand on a fifth consecutive league crown -- a feat Juve last achieved in 1935.

Morata, however, says Juve's fightback from the lower reaches to the table earlier this season will count for nothing if they don't triumph on May 15.

"We didn't start the season well and we battled hard to get back into contention, but it won't count for anything if we don't win the title," said the Spain striker.

"In the Italian league, one bad result can help relaunch your rivals. We have a great opportunity, but only if we focus on our own task at hand."

Although there are seven games left, Juventus have a comparatively easy run-in.

Napoli, meanwhile, are set to be without striker Gonzalo Higuain after he was handed four-match ban for pushing and insulting the referee in the bad-tempered loss at Udinese.

Two of Napoli's remaining games are difficult away trips to Inter Milan, next week, and Roma, in a fortnight.