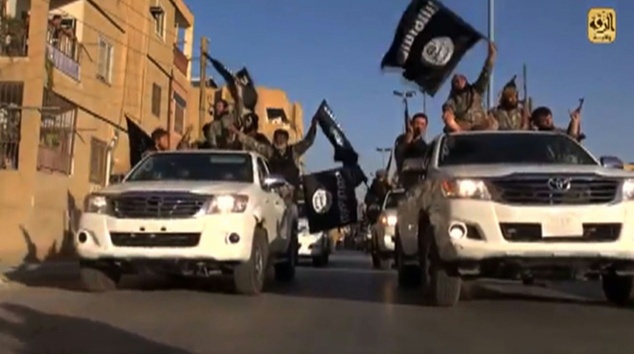 The IS fighters control a huge swathe of territory in Iraq and Syria.

The Syrian conflict has set the stage globally for the Islamic State group to spread like cancer or Ebola, the UN chief and the top UN Syria envoy said Friday.

The war raging in Syria has "provided the perfect breeding ground for extremists and terrorists to take root in the society," UN Secretary-General Ban Ki-moon said in Geneva.

"Now (the IS) and all the extremists are spreading like a cancer around the world," he said on the sidelines of a high-level conference on preventing violent extremism.

In an address before some of the 700 participants, including around 30 ministers and deputy ministers, UN envoy for Syria Staffan de Mistura meanwhile said IS and other violent extremists are "like Ebola. They are looking for a weak body" to infect.

"Any conflict that we allow to be protracted... is now being infiltrated by the DNA of (IS) or international terrorism," he said.

But both Ban and de Mistura insisted that, like disease, the extremist threat can be beaten with the right remedies.

"Ebola has been treated and... I think (IS) and international terrorism can be treated, but with a series of different medicines used simultaneously," de Mistura said.

Ban meanwhile urged a radical rethink of ways to counter the global terrorist threat, which he stressed was "not rooted or confined to any religion, region, nationality or ethnic group."

"Evidence shows that security and military responses alone cannot defeat this scourge," he said, adding that heavy-handed responses have sometimes been "counter-productive" and can "end up further fuelling violent extremism".

UN rights chief Zeid Ra'ad Al Hussein agreed, telling the conference that "to fight violence, we must move beyond violence, lawful or otherwise."

"If counter-terrorism operations compound fear and divisiveness... (they) do the extremists' work," he said.

In January, Ban launched a global action plan, asking countries to come up with national plans to address the problem.

His strategy encompasses 79 recommendations, from boosting education and promoting human rights to countering the recruitment drives of groups like IS and Boko Haram which prey on disaffected youth.

It also calls for countries to try to appeal to fighters who have joined groups like IS to return home by offering education and job opportunities, and urges governments to engage with social media to find ways to challenge the jihadists' messages.

Belgian Foreign Minister Didier Reynders, whose country last month was rocked by terror attacks that killed 32 people, was among the many ministers who voiced support for Ban's plan.

"We must remain vigilant to ensure that our fight against terrorism respects freedom of expression, the freedom of citizens," he told delegates.

"Respecting human rights is not only an efficient way to fight terrorism, but it is also a way to not give in to the terrorists," he said.

"Preventing violent extremism means stepping up efforts to promote the rule of law, human rights and, in armed conflicts, international humanitarian law," he told the conference.

Countries also need to "offer young people opportunities and render them unreceptive to the temptations of terrorism," through education and job opportunities, he said.

Ban said Friday he aimed to create a high-level action group to review and help implement his plan to prevent violent extremism.