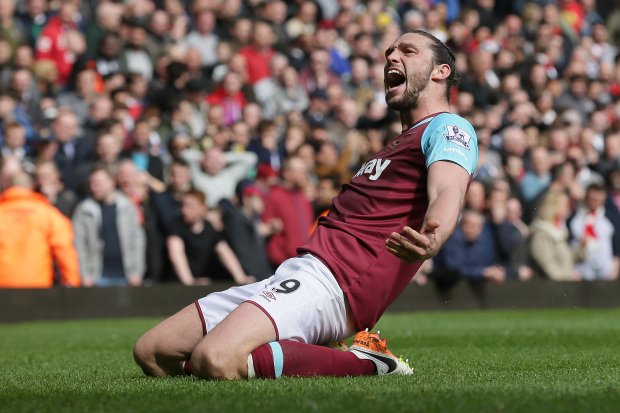 London: Hapless bottom club Aston Villa avoided relegation from the Premier League by the skin of their teeth on Saturday despite a 2-1 loss at home to Bournemouth.

"Not going down today is a small consolation," Villa caretaker manager Eric Black admitted to the BBC.

Meanwhile, Arsenal's title hopes took another hit in a 3-3 draw at West Ham United, with Laurent Koscielny's strike earning a point for the visitors after Andy Carroll's hat-trick saw West Ham come from 2-0 down to lead.

Fourth-place Manchester City closed to within two points of Arsenal after Samir Nasri crowned his first start since September with the winner in a 2-1 success against West Bromwich Albion.

While Villa remain a top-flight club for the time being, demotion to the second tier for the first time since the 1987-88 season is all but inevitable.

Villa are now 15 points below fourth-bottom Norwich with only 15 points left to play for.

Cook put Bournemouth ahead with a clever back-heel finish in first-half stoppage time and King added another in the 74th minute, before Jordan Ayew reduced the arrears late on.

"We've conceded poor-ish goals, but we have to remain professional until the end," added Black, who stepped in last month after Villa parted company with manager Remi Garde.

"Come Monday morning we have to dust ourselves down and go again."

In contrast, Eddie Howe's Bournemouth, promoted from the Championship last May, are now 14 points clear of danger in 11th place and can look forward to another season of top-flight football.

That Villa evaded the executioner's axe owed to a glorious goal from Jason Puncheon, whose 68th-minute curler earned Palace a 1-0 win over Norwich that ended a dismal run of 14 league games without victory.

Palace are now 10 points clear of the relegation zone, having played a game more than third-bottom Sunderland, who trail Norwich by four points with two games in hand.

Sloppy defending allowed Shane Long, Graziano Pelle and Victor Wanyama to put Southampton 3-0 up before the hour, with Andros Townsend replying -- spectacularly, but in vain -- in the 65th minute.

"It's important that everybody continues to believe," said Benitez.

"The anxiety is killing us sometimes. If we can control these things then things will change."

West Ham and Arsenal played out a gripping but mutually damaging six-goal thriller at Upton Park that did little for either the former's Champions League hopes or the latter's fading title aspirations.

Neatly taken goals by Mesut Ozil and Alexis Sanchez put Arsenal 2-0 up, only for Carroll to net twice in 160 seconds at the end of the first half.

The towering striker headed in Michail Antonio's cross to complete an eight-minute hat-trick early in the second period, but Arsenal rescued a point when Koscielny hooked in a 70th-minute equaliser.

"Do we still have an opportunity to win the title? I don't know. We made it more difficult today."

City are snapping at Arsenal's heels after coming from behind to beat West Brom.

Stephane Sessegnon rattled a shot inside Joe Hart's near post in the sixth minute to put the visitors ahead, but Sergio Aguero equalised with a 19th-minute penalty after Sessegnon clipped Aleksandar Kolarov.

Back in the team following five months out with a serious hamstring problem, Nasri settled matters in the 66th minute when he tucked home after Aguero had seen a shot blocked.

But in a big concern ahead of Tuesday's Champions League quarter-final home leg against Paris Saint-Germain, which is poised at 2-2, Aguero hobbled off late on after being caught on the heel by Craig Gardner.

In the day's remaining fixture, Everton's James McCarthy and Watford's Jose Holebas both struck in first-half injury time in a 1-1 draw at Vicarage Road.