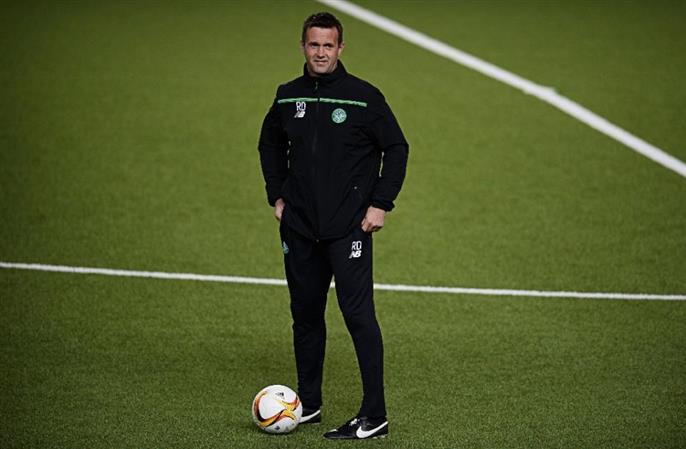 A win over Motherwell eases some of the pressure on manager Ronny Deila, who has come in for some stinging criticism from supporters following some disappointing displays this season (AFP Photo)

The Hoops extended their lead at the top of the table to eight points as they took advantage of nearest challengers Aberdeen's 2-1 defeat to third-placed Hearts on Friday.

When asked if the championship was now within his side's grasp, Kennedy said: "Almost. But we have to make sure we take care of business.

"It puts us in a very good position and that's where we want to be. The objective before the game was to make sure we were eight points clear.

"At this time of year it's about getting the three points and we've managed to do that. It has been a big ask coming back from an international week -- when we had a lot of boys away -- to then play three games in a week.

"We've come out with seven points and we're sitting in a very good position."

The result eases some of the pressure on manager Ronny Deila, who has come in for some stinging criticism from supporters of the club following some disappointing displays this season.

Deila didn't fulfil his usual media duties after the game, although Kennedy insisted the Norwegian's absence was nothing to do with Motherwell manager Mark McGhee's refusal to shake his hand at full-time at Fir Park.

Kennedy added that the criticism of Deila came with the job at Celtic and that the win over Motherwell would give everyone connected with the club a boost.

"I think with any Celtic manager whenever they aren't getting the results expected there is always a pressure there," Kennedy said.

"There is always criticism that comes your way but it's important that you stand strong. Both the fans, the club and the players -- everyone together.

"Results change that so it's important that you get three points. Once you start winning games the confidence builds and it gives everyone a lift."

A dominant first-half display from Celtic at Fir Park saw Leigh Griffiths fire a penalty wide before making amends as he steered a 44th-minute shot past Connor Ripley to end a run of four games without a goal.

Motherwell thought they had grabbed a 55th-minute equaliser after Scott McDonald fired home Louis Moult's cross but the Australian striker was adjudged to have strayed offside and his effort was chopped off.

However, the former Hoops striker wasn't to be denied on the hour mark as he fired Motherwell level before an error from on-loan Middlesbrough 'keeper Ripley allowed Griffiths to restore Celtic's advantage with his 37th goal of the season.

Defeats for Dundee and Partick Thistle allowed Motherwell to retain their place in the top six as the league splits but McGhee was unhappy with the decision to rule out McDonald's first effort for offside.

"It looked to all the world that the goal that was disallowed was onside and once again we feel as if we've been let down by the officials, which is horrendous given the importance of the situation," McGhee said.

"It's a shocking decision. We have video replays and we know it's level.

"The second-half display came as no surprise as the reason we're here is because of the fight shown by my side every week even through the spell we were getting poor results."

Dundee United's hopes of avoiding relegation were dealt a major blow following a 2-0 defeat by Inverness Caledonian Thistle at Tannadice.

The result, allied with Kilmarnock's 3-0 win over St Johnstone, means Mixu Paatelainen's side are now eight points adrift at the bottom of the table with just five games left.