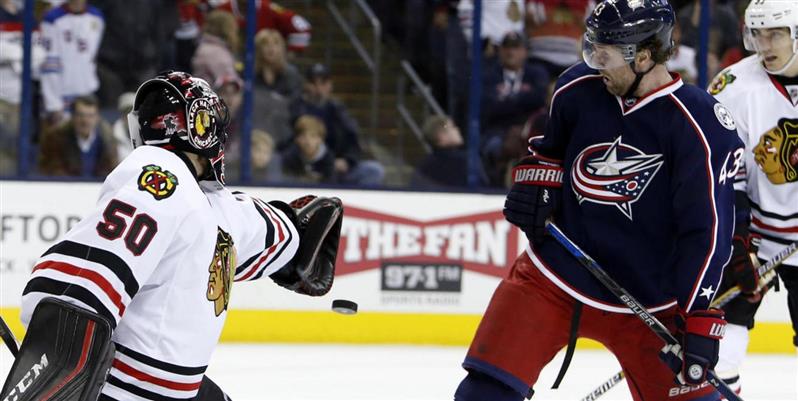 Vladimir Tarasenko started the scoring with his 40th after getting the tying and winning goals in an overtime victory Thursday night at Chicago. The Blues did little else in their regular season finale and finished with the third seed in the Western Conference, pitting them against the Blackhawks in the first round of the playoffs.

Washington, the runaway President's Trophy winners and Eastern Conference champions, will open against the Flyers.

Dallas: Jason Spezza scored three times, including the winner with 1 minute remaining, and Dallas beat Nashville to clinch the Central Division title and the top seed in the Western Conference playoffs.

Spezza's second of two goals in the second period was No. 300 for his career. It was his second hat trick of the season and the seventh of his career.

Dallas will open the playoffs against Minnesota following its first division title since the 2005-06 season. The Stars finished with the most points in the West for the first time since 2002-03.

Even with the loss, the Red Wings reached the playoffs for a 25th consecutive season when the Ottawa Senators beat the Boston Bruins 6-1. Detroit clinched third place in the Atlantic Division and will play the Tampa Bay Lightning in the first round.

Dan Boyle scored in the first period for the Rangers, who finished the regular season with 101 points and still don't know who they will meet in the playoffs, which start Wednesday.

Blake Wheeler scored the tying goal on a pass from Scheifele, and the Jets closed another non-playoff season with a stirring rally for their fourth straight victory.

Winnipeg also put the Pacific race in the hands of the Anaheim Ducks, who can win their fourth straight division title with a victory in Washington on Sunday. Los Angeles has 102 points and the tiebreaker edge over the Ducks, who have 101 points after beating Colorado earlier Saturday.

Jonathan Quick made 27 saves for the Kings, who could have clinched just the second division title in the franchise's 48-season history.

San Jose: Joe Pavelski scored on a power play 7:29 into the third period and Martin Jones made 20 saves to lift San Jose over Arizona in the regular season finale for both teams.

Joe Thornton, named the Sharks Player of the Year earlier in the day, got his 964th assist to tie for 13th on the career list. He had an assist in all five games against the Coyotes this season.

The Sharks enter the playoffs with an 18-20-3 home record. They are the only playoff team with a losing record at home.

San Jose opens the playoffs against either the Los Angeles Kings or Anaheim Ducks. Its opponent will be determined when the Ducks play Washington on Sunday.

Boston: The Bruins lost starting goalie Tuukka Rask 90 minutes before the faceoff, blew their regular-season finale midway through the game and said goodbye to the playoffs before the day was over.

With Rask out sick for the Bruins' last-gasp run at the postseason, Jonas Gustavsson allowed four goals in the first half of the second period in the regular-season finale.

Boston was eliminated from playoff contention when Philadelphia beat Pittsburgh 3-1 later in the day.

Chris Neil, Zack Smith, Matt Puempel and Mika Zibanejad scored over 8:18 in the second period, and Andrew Hammond stopped 39 shots for the Senators.

The Bruins' chances of avoiding a second consecutive missed postseason were damaged when Rask, the 2014 Vezina Trophy winner, was scratched with an illness.

Sunrise: Florida finished off its record-setting regular season by scoring three times in the first 8 minutes in a win over Carolina.

Reilly Smith scored his 25th goal into the empty net with 5.5 seconds left.

Roberto Luongo made 24 saves and matched his single-season franchise record for wins with 35, which he also did in the 2005-2006 season.

Elias Lindholm and Jordan Staal each had a goal and an assist for the Hurricanes.

The Flyers will meet top-seeded Washington in the first round. The Penguins, who are the No. 3 seed in the Eastern Conference, will play the Rangers or Islanders.

Pittsburgh rested Sidney Crosby and Kris Letang and played without Evgeni Malkin for the 15th consecutive game because of an upper-body injury.

Penguins goaltender Matt Murray was injured in a collision with Brayden Schenn and left the game in the first period. Murray has started five straight games because Marc-Andre Fleury is out with a concussion.

Cam Fowler, Ryan Garbutt and Ryan Getzlaf also scored for Anaheim, which still has a chance at the Pacific Division title should Los Angeles lose in regulation Saturday night and the Ducks get at least a point Sunday in Washington.

The Ducks scratched 11 players, but they still had enough punch to jump to a 3-0 lead and withstand Colorado's second-period rally.

Nick Holden, Jarome Iginla and Zach Redmond scored as the Avalanche wrapped up the season by dropping eight of their last nine to miss the playoffs for a second straight year. Before the game, general manager Joe Sakic said coach Patrick Roy will return for another season.

Montreal: Alex Galchenyuk and Max Pacioretty each scored twice to reach the 30-goal mark and Montreal ended the regular season with a victory over Tampa Bay.

Tomas Plekanec also scored for Montreal, which missed the playoffs for the second time in nine years. Mike Condon made 21 saves.

Jonathan Drouin scored his second in as many games since returning from a hiatus and Ondrej Palat also scored for the Lightning, who had already clinched a postseason spot. They open the playoffs Wednesday at home against Detroit.

Columbus: Scott Hartnell scored a power-play goal at 2:28 of overtime, and Columbus rallied for a victory over depleted Chicago.

Hartnell finished with two goals and two assists as Columbus (34-40-8) closed its season with four wins in five games. Alexander Wennberg had a goal and two assists for the Blue Jackets, and Brandon Saad added a goal and an assist against his former team.

The Blackhawks were without a couple players due to injuries, and held out captain Jonathan Toews and defenseman Niklas Hjalmarsson for rest ahead of the playoffs. Patrick Kane and rookie Artemi Panarin each had two goals and an assist for the defending Stanley Cup champions, who head into the postseason off a pair of overtime losses.

New York: Brian Gionta scored twice, including the deciding goal with 2:14 left in overtime, to lead Buffalo over New York.

Matt Moulson and Evan Rodrigues also scored for the Sabres, who finished the season with a 35-36-11 record and will miss the playoffs.

Scott Mayfield, Alan Quine and John Tavares scored and Christopher Gibson made 22 saves for the Islanders, who are still waiting to learn their playoff opponent.

St. Paul: Patrick Sieloff scored the go-ahead goal in his first NHL game and Niklas Backstrom made 35 saves against his former team, leading Calgary over Minnesota.

Sieloff, summoned from the AHL by the Flames for their meaningless season finale, scored with 5:54 remaining. That was just 31 seconds after Brandon Bollig's goal tied the game against backup Wild goalie Darcy Kuemper.

Zac Dalpe scored in the second period for the Wild (38-33-11), who stumbled into the postseason with their fifth consecutive loss. They have the fewest standings points (87) by a playoff qualifier since the shootout was added in 2005.

Devante Smith-Pelly also scored and Cory Schneider made 19 saves for the Devils, who have missed the Stanley Cup playoffs the last four seasons. Palmieri scored into an empty net. Patrik Elias scored with 16 seconds left in what might be his final NHL game.

Pierre-Alexandre Parenteau scored and Garret Sparks made 31 saves for the Maple Leafs, who finish with the NHL's worst record and will be missing the postseason for the third straight season.

Vancouver: Emerson Etem scored in the seventh round of the shootout, and Vancouver beat Edmonton in the finale of a disappointing season for each team.

Etem beat Cam Talbot with a nice move through the goaltender's legs for the clinching score after Patrick Maroon was stopped by Jacob Markstrom at the other end.

Derek Dorsett, Jannik Hansen and Etem scored in regulation for the Canucks (31-38-13), who missed the playoffs for the second time in three years and finished with their lowest point total since putting up just 58 for the 1998-