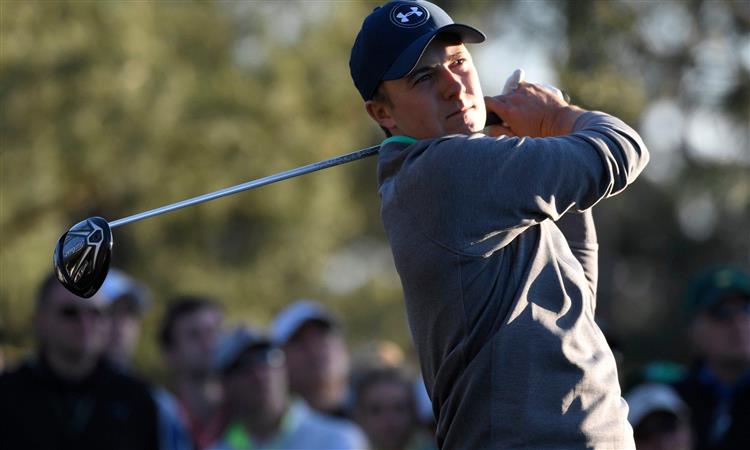 Jordan Spieth hits his tee shot on the 18th. The defending champion holds a one-shot lead after three rounds despite dropping two shots over the last two holes. (Guardian Photo)

Augusta: A year ago, the Masters was supposed to belong to Rory McIlroy. Then Jordan Spieth cut in line.

This year, the Texan didn't bother saying "excuse me." He simply shoved McIlroy out of his way.

The two went off as the final pair on a blustrey Saturday afternoon separated by a single shot and came back five apart, They were playing together for the first time in a final group at a major. It would have ended even worse for the Northern Irishman had Spieth not tripped himself up at the end, making bogey-double bogey on the last two holes.

"To be honest with you, I would be feeling a lot worse about myself if I hadn't have just seen what Jordan did," McIlroy said after signing for a 5-over 77. "I sort of take a bit of heart from that, that I'm still in this golf tournament."

McIlroy said he felt like he was swimming upstream for much of the round.

"I was always trying to get something going and I just couldn't," he said. "I felt like I righted the ship the last seven holes, I made seven pars coming in and had a lot of chances coming in, but I didn't take any opportunities."

The strange thing is how well this course fits McIlroy's strengths — the booming drives and high approach shots. But there's something about it that spooks him, too. He's been here seven times before and has yet to figure out how get past holes 10-12.

McIlroy is now a mind-numbing 26-over par on those three holes and 25-under for the rest. Who can forget him standing on the lawn in front of Butler Cabin on the final day in 2011, after smashing his tee shot off a tree, at the beginning of a triple-bogey adventure that would drop him from first place to seventh?

So it was again in Round 3; a hooked drive off the 10th tee left McIlroy in the pine straw and eventually produced a bogey 5. Another hooked drive off No. 11 — more trees, worse result — turned into a double. Then came the string of pars he sounded satisfied with, even though they would have cost him a shot at contending Sunday had Spieth not had his own problems on the last two holes.

Spieth acknowledged "it will be tough personally" to get past the memory of that mini-collapse.

"I'm not going to dodge the question by any means," he said. "It's not going to be fun tonight for a little while, and hopefully I just sleep it off and it's fine tomorrow. I imagine that will be the case."

As for playing alongside McIlroy, that was a question he was only too willing to dodge.

"I love playing with Rory," he began, then added, "there wasn't much conversation. He just couldn't get anything going today, couldn't get any of the putts to go. So it was kind of just a blah round at that.

"But again, it's always nice walking 18 holes with him."

Maybe from Spieth's perspective, since the Texan's rise has come at McIlroy's expense. McIlroy captured the last two majors of 2014 — they gave him four at the then-tender age of 25 — and a win at the 2015 Masters would have made him only the sixth golfer ever to complete a career Grand Slam.

Nike, his principal sponsor, got caught up in the hype as well, shelling out for a slick TV ad that debuted around this time last year, showing a kid who was supposed to be McIlroy, watching Tiger Woods tearing up golf while dreaming of one day doing the same.

But Spieth went wire-to-wire to win last year's Masters and usurped McIlroy's place again later that summer at the U.S. Open. Any thoughts about payback at the British Open ended when McIlroy ruptured tendons in his ankle while playing soccer. He lost his No. 1 ranking, and both have since been overtaken by Australian Jason Day.

For a long time, McIlroy, who at 26 is four years older than Spieth, was loathe to admit there was even a rivalry. It hardly matters now what McIlroy thinks. He's losing ground to Spieth major by major, and this weekend at Augusta National, hole by hole.