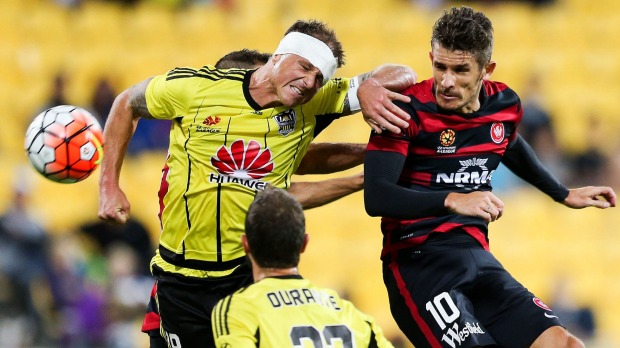 Good away win: Ben Sigmund of the Phoenix defends against Dario Vidosic of the Wanderers. (SMH Photo)

Sydney: Adelaide United finished top of Australia's A-League ahead of Western Sydney Wanderers second after Sunday's 27th and final round of matches heading into next week's play-offs.

Adelaide clinched the Premier's Plate as the top team after the regular season with a 2-0 away win over Melbourne City, coupled with rivals Brisbane Roar's scoreless draw at Melbourne Victory.

A double from Brendon Santalab sealed a 2-0 win for the Wanderers over Wellington Phoenix in New Zealand on Sunday to have next week off in the first week of the finals along with Adelaide.

The Reds, coached by Barcelona great Guillermo Amor, were crowned A-League premiers after Melbourne Victory and their goalkeeper Lawrence Thomas frustrated Brisbane's attempts for three points which would have enabled them to finish the season on top.

Thomas made an outstanding reflex save to deny James Donachie in stoppage time after earlier efforts to deny goal-bound attempts from Jamie Maclaren and Brazilian super sub Henrique.

Brisbane's inability to put away Victory meant that Adelaide finished top after climbing off the bottom of the standings following eight win-less weeks to start the season.

Brisbane will instead have to back up but with home advantage over Victory in their elimination final next weekend.

Sydney FC denied Perth Glory a home elimination final next week breaking their 11-match win-less run with a 4-0 mauling in their final match of the season.

Graham Arnold's Sydney FC had nothing else to play for but pride after missing the finals but they cheered their fans with goals from David Carney, Filip Holosko, Ali Abbas and Milos Ninkovic.

Kenny Lowe's Glory will now have to travel to Melbourne City next weekend to keep their title ambitions alive.

Melbourne City lost 2-0 to Adelaide with goals from Spaniard Isaias and a Bruce Djite penalty.