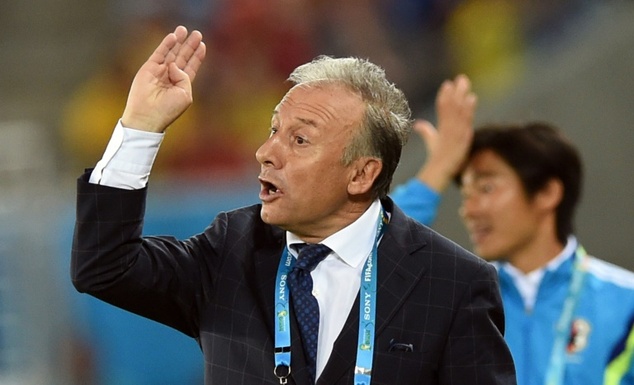 Beijing Guoan coach Alberto Zaccheroni has faced a barrage of calls for his resignation on Chinese social media. (AFP/File)

China striker Gao Lin opened the scoring in the 10th minute before Brazilian international playmaker Ricardo Goulart netted in the 44th and 81st minutes in front of 53,080 fans at Beijing's Workers' Stadium.

The defeat leaves Beijing, traditionally one of China's strongest sides, bottom of the table after only earning one point three games and scoring zero goals.

Beijing have played one less game than their rivals, and eight million euro ($9.1 million) signing from Galatasaray, Turkish international striker Burak Yilmaz, is injured and has yet to make his debut.

However, former AC Milan, Internazionale and Lazio manager Zaccheroni faced a barrage of calls for his resignation on Chinese social media site, one of which was even "liked" by Beijing board member Shen Li.

Beijing chairman Luo Ning said the club backed the Italian, but he added: "The start of this season has seen some unfortunate calamities happen to us. Ultimately though, success is measured by results on the pitch."

Elsewhere, Sven-Goran Eriksson's Shanghai SIPG won their first league game of the season with a solid 4-0 victory at home over Liaoning.

It was left to Chinese international Ji Xiang to score three minutes from time to keep the club one point ahead of Guangzhou Evergrande at the top of the table.

Ex-Paris Saint-Germain forward Ezequiel Lavezzi's Heibei China Fortune moved up to third in the table with a 1-0 win over Changchun Yatai, thanks to a 59th-minute goal from Luo Senwen.