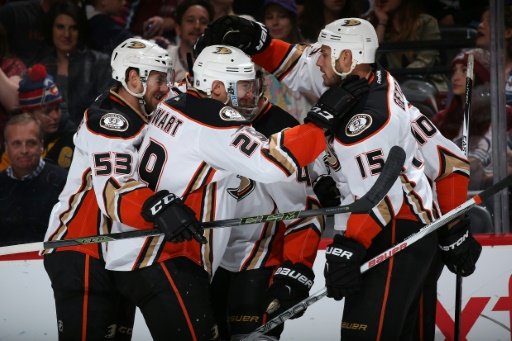 The Anaheim Ducks celebrate a goal by Cam Fowler during their game against the Colorado Avalanche at Pepsi Center on April 9, 2016. (AFP Photo)

Washington: Anaheim Ducks made the most of their make-up day on Sunday, downing the Washington Capitals 2-0 to clinch the Pacific Division title as the NHL regular-season went into overtime.

The Ducks-Caps clash was one of two games that were snowed out this season and made up a day after the scheduled end of the regular season.

The Ducks earned their fourth consecutive division title, slipping ahead of the Los Angeles Kings by one point after winning the NHL's final regular-season game. They'll face the Nashville Predators in the opening round of the playoffs, which start on Wednesday.

In New York, the Philadelphia Flyers scored five unanswered goals between the first and third periods in a 5-2 victory over the Islanders.

The Flyers were already assured of the second wild card in the Eastern Conference and a first-round clash with the Capitals in the Stanley Cup playoffs.

Washington are the top overall seeds and will have home-ice advantage throughout the playoffs.

With the defeat, the Islanders go into the playoffs as the first wild card and will face the Atlantic Division champion Florida Panthers.

Had they won the Islanders would have set up a meeting with the Pittsburgh Penguins, who will instead face the New York Rangers.

With the campaign officially complete the NHL announced its regular-season awards.

Kane finished the season with a career-high 46 goals, 60 assists and 106 points.