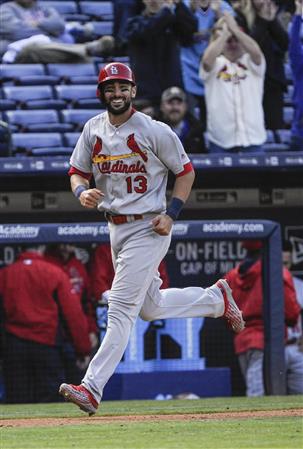 St. Louis Cardinals' Matt Carpenter runs the third base line on his three-run home run against the Atlanta Braves during the ninth inning of a baseball game Sunday, April 10, 2016, in Atlanta. (AP Photo)

Manny Machado went 4-for-4, including his third home run of the season, and the Baltimore Orioles are off to their best start in nearly 50 years with a 5-3 victory over the Tampa Bay Rays on Sunday.

The Orioles took both games against their American League East rivals after Saturday's game was postponed because of rain. Baltimore improved to 5-0 for the first time since 1970.

The Phillies took two of three from the Mets for their first series win at Citi Field since May 9-11, 2014. Prior to Saturday, Philadelphia had dropped 14 of its last 17 at Citi Field.

The Blue Jays avoided being swept in the three-game series by the Red Sox. Estrada (1-0) allowed five hits and two walks while striking out eight in seven innings.

Jayson Werth had a bloop single with the bases loaded to drive in the go-ahead run in the seventh inning as Washington beat Miami to split the two-game series.

It was the first hit of the season in 14 at-bats for Werth, whose one-out hit came against former teammate Edwin Jackson.

Jay Bruce's triple in the bottom of the ninth inning scored Brandon Phillips from first base to lift Cincinnati over Pittsburgh in the finale of a three-game series.

Phillips led off the ninth with a single. Two batters later, Bruce ripped a pitch from Arquimedes Caminero (0-1) to right and Phillips raced home with the winning run. Ross Ohlendorf (2-0) earned the victory for Cincinnati.

Terrance Gore scored an unearned run on a wild pitch with two outs in the 10th inning to give Kansas City the win.

Gore, running for Christian Colon, who led off the inning with a walk, took third on reliever Trevor May's throwing error on a pickoff attempt. May's wild pitch got Gore home with a head-first slide. The Royals did not have a hit in the inning.

The Cardinals scored twice after two outs in the eighth inning to take the lead and added five runs in the ninth to complete their first three-game sweep in Atlanta since 1988.

Brandon Moss and Matt Carpenter each had three-run homers for the Cardinals, and the Braves fell to 0-5 for their worst start since losing the first 10 games of the 1988 season.

Jimmy Nelson struck out nine and Aaron Hill drove in a pair of runs as the Brewers won their first series of the season.

Nelson (1-1) worked six-plus innings and scattered three hits while walking four. Jose Altuve crushed Nelson's first offering of the game for a home run to left and George Springer followed with a base hit on pitch No. 2.

Jake Arrieta hit a two-run home run in his 13th consecutive regular-season victory, and Jorge Soler added a homer and two RBIs in Chicago's victory over Arizona at Chase Field.

Reigning NL Cy Young winner Arrieta gave up three runs in seven innings while making his 22nd straight regular-season quality start. He gave up eight hits and struck out six without issuing a walk. He has not lost since July 25, 2015.

Joe Panik hit a two-run, tiebreaking double in the sixth inning and Johnny Cueto overcame a shaky start to strike out eight in seven innings of work as San Francisco won for the third time in their four-game series with Los Angeles.

Buster Posey, Brandon Belt and Angel Pagan hit home runs for the Giants, who homered in all seven of their games in the first week of the season, a franchise record for the start of a year.

Coco Crisp picked a good time to hit his first home run in more than 19 months, sending a two-out solo shot into the right-field seats in the top of the 10th inning Sunday to lead Oakland to a win and series sweep over Seattle.

John Axford earned the win, while Seattle's Nick Vincent (1-1) suffered the loss after serving up the Crisp homer.

Chad Bettis had a much-needed strong start, and Colorado walloped five home runs in a win over San Diego.

Carlos Gonzalez homered twice, and Trevor Story homered for the seventh time in his first six major league games for the Rockies.

Weaver allowed six hits, one run, one walk and one hit batter in six innings while striking out four and throwing 84 pitches. With the win, the right-hander surpasses Hall of Famer Nolan Ryan to take over second place in career victories for the club with 139.

Rain postponed the series finale between Chicago and Cleveland.