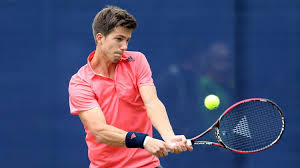 Monte Carlo: British number two Aljaz Bedene will face one of the toughest tests on clay when he takes on eight-time champion Rafael Nadal after advancing into the second round of the Monte Carlo Masters on Monday.

Bedene booked his spot against Spain's king of clay as he defeated Czech Lukas Rosol 6-2, 6-3.

Spain's Guillermo Garcia-Lopez made it past Brazil's Thomaz Bellucci 7-5, 6-1 to next face third seed and four-time finalist Roger Federer, who is set to play his first match in more than two months after a knee procedure.

Nadal is looking for his first title on any surface since last summer and will willingly make 57th-ranked, Slovenia-born Bedene his first victim of the week in the principality.

But Bedene appears ready to take up the challenge. "I'm playing well, at the moment I'm enjoying playing tennis. It's going to be against Rafa, who I respect. He's one of the best clay-courters.

"It's going to be fun, definitely if I bring my best tennis. I'm not the favourite, but I stand a chance. It's never a good time to play someone like him. But if I can pick any, this is the time."

Nadal has been struggling to emerge from a long-running crisis of confidence on court, with the 29-year-old now believing that he is back to his normal clay level.

German teenager Alexander Zverev continued to impress after holding a match point against Nadal last month at Indian Wells, with the 18-year-old winning his debut match in the principality over longtime junior rival Andrey Rublev 6-1, 6-3.

That quick victory in one hour lines up the 54th-ranked Zverev against former Monte Carlo finalist David Ferrer in the second round.

"It's going to be a great match, a great test for me," Zverev said, "He's one of the toughest competitors on clay. He's been playing great on clay his whole career.