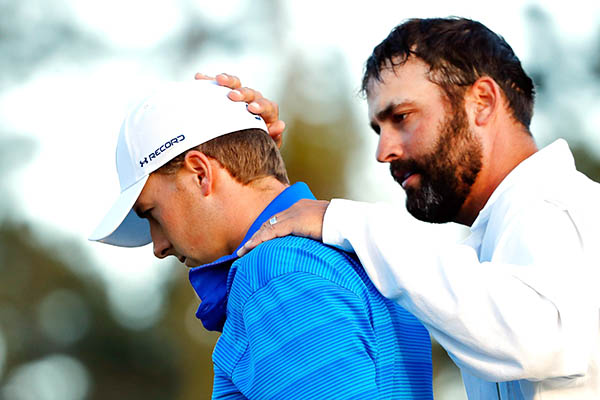 Spieth, left, and his caddie react after finishing on the 18th green during the final round

Augusta, United States: The meltdown, when it came, was quick and brutal.

Walking onto the 10th tee, Jordan Spieth looked cucumber cool and seemingly totally in charge of the Masters, five shots clear of the field.

Two holes and some 20 minutes later – down in the depths of Amen Corner – he was a wreck, telling his caddie Mike Greller: “Buddy, it seems like we are collapsing.”

The drama brought back memories of Greg Norman’s epic surrender to Nick Faldo in 1996 and Rory McIlroy’s short-circuit while leading by four shots in 2011.

And Spieth admitted afterwards that his Masters capitulation on Sunday, handing the victory to England’s Danny Willett, will take him some time to recover from.

“Yeah, it’s a tough one,” he said. “I knew the lead was five with nine holes to play. And I knew that those two bogeys weren’t going to hurt me. But I didn’t take that extra deep breath and really focus on my line on 12. Instead I went up and I just put a quick swing on it.”

Spieth bogeyed the 10th and then an errant tee shot brought another dropped shot on the tough par-4 11th.

But it was what happened at the 12th – arguably the most famous and deadliest par-3 in golf – that really did the damage.

Spieth’s tee shot at the 155-yard gem, named the Golden Bell, slipped back into Rae’s Creek.

That was bad enough, but he then inexplicably hit heavy after taking a drop and his ball was wet again. Next one went into a bunker and two putts brought up a quadruple-bogey seven.

“Twelve is a 150?yard shot and I feel I can bleed it next to the hole, and it’s a stock 9-iron for me. But that hole, for whatever reason, just has people’s number,” he said.

Even then, he should have been able to come away with a five and limit the damage, but indecision over where to drop the ball played havoc with his mindset.

“I wasn’t exactly sure what to do there,” he said.

“I wanted to get it to a number where I could have it end up where it landed. It would take a skip and come back. So I wanted 80 yards.

“So I tried to get 80 yards. I’m not really sure what happened on the next shot. I just hit it fat.”

Spieth was on the ropes as Willett stormed down the back nine with three birdies and the 22-year-old defending champion had five holes to rescue his tournament.

Birdies at 13 and 15 gave him some hope, but a missed six-footer at the 16th and a par-par finish by Willett closed the door.

Spieth was left to dream about what might have been as he became just the second defending champion, after Ben Hogan, to lead after 54 holes the following year and fail to clinch the win.

Next up for Spieth as concerns the majors will be the defense of his US Open crown at Oakmont outside Pittsburgh in June.

He can take encouragement from McIlroy’s turnaround after his 2001 Masters debacle, winning the US Open at Congressional by eight strokes.

“Of course we’re going to fight back, you know. There’s no give up in us. We tried, but it just was one bad swing,” he said.