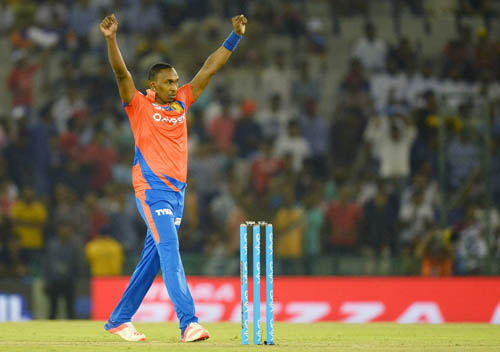 Mohali: Dwayne Bravo became the first player to take 300 Twenty20 wickets before Aaron Finch struck a half-century to lead the Gujarat Lions to a five-wicket win over the Kings XI Punjab in an Indian Premier League (IPL) match here yesterday.

Seamer Bravo ended with figures of 4-22, his best figures in IPL cricket, as he claimed his 300th T20 wicket in his 292nd match to overtake Sri Lanka paceman Lasith Malinga, who has 299 T20 wickets, as Gujarat restricted Punjab to 161 for six.

Gujarat slipped to 1-1 in their reply before Suresh Raina (20) and Finch combined for a second-wicket stand of 51 off just 4.3 overs before Raina was caught at mid-on off Marcus Stoinis.

Finch reached his fifty in 32 balls but was finally dismissed when he was stumped off a delivery from legspinner Pardeep Sahu to leave the visitors on 117 for three in the 12th over.

Ravindra Jadeja (8) and Ishan Kishan (11) departed rather cheaply before Dinesh Karthik steered Gujarat to victory with 41 not out off 26 balls.

Gujarat won the toss and elected to field and initially it looked as if the decision might backfire on them as Punjab made a fine start to their innings with Manan Vohra and Murali Vijay thumping 78 runs for the first wicket off 8.2 overs.

Vohra scored 38 from 23 balls before he was caught behind off the bowling of left-arm spinner Jadeja.

Jadeja struck again when he removed the dangerous Vijay, for a well-played 42 to leave Punjab on 91 for two which soon became 101 for three when Glenn Maxwell (2) was yorked by Bravo.

Australian Stoinis, making his IPL debut, and Wriddhiman Saha then resurrected the innings with a fifth-wicket stand of 55 off 7.3 overs.

Saha played second-fiddle to Stoinis as he battled to a gritty 20 off 25 balls while Stoinis scored 33 off 22 deliveries.

Saha was dismissed in the last over when he hoisted a Bravo delivery to Jadeja at deep mid-wicket before Bravo struck with his next ball when Stoinis dragged a delivery to Aaron Finch at long-on.