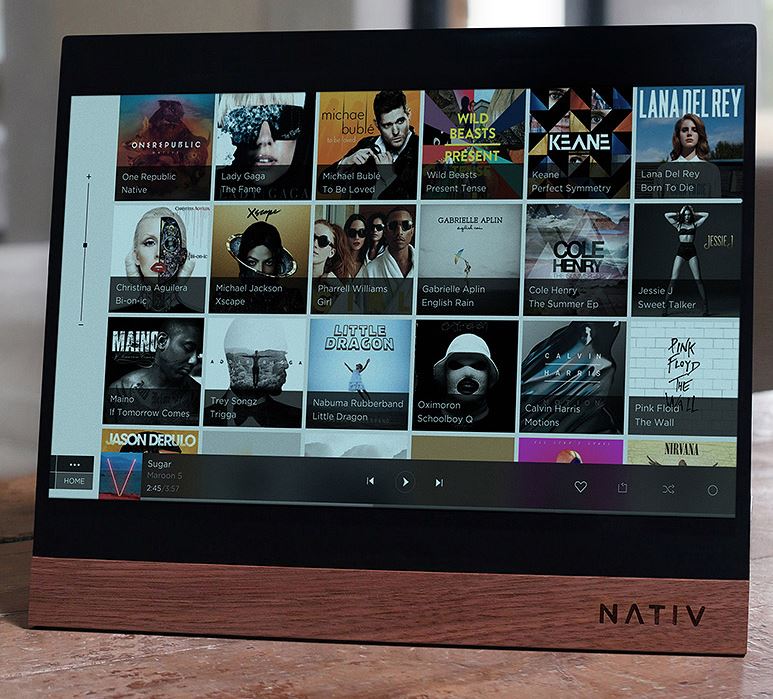 At its heart is Nativ Vita™, an innovative music player with a stunning 11.6” touch-screen and simple access to all music of the world.

It features built-in support for popular streaming services such as Apple Music and Spotify, and seamlessly plays music from your smartphone, computer or NAS. Nativ Vita™ integrates the latest wireless technologies to stream high fidelity music to virtually any wireless speaker or headphone, or delivers music in bit-perfect quality to your A/V receiver or DAC. Connect Nativ Vita™ to your TV and enjoy the latest music videos, or conveniently navigate your library on the big screen.

Nativ today also introduced Nativ Wave™, a state-of-the-art Digital-to-Analog Converter (DAC) and headphone amplifier that converts the music on Nativ Vita™—or any other digital source—to beautiful sound. Nativ Wave™ is designed for the future of High-Resolution Audio and supports all major formats, including DSD, DXD and Meridian’s groundbreaking MQA technology.

“Nativ is a great addition for anyone that loves music.” says Michael Li, CEO and Co-Founder of Nativ.

“From audiophiles with high-performance audio and A/V systems to the casual music fan with wireless speaker solutions. Nativ enhances your existing gear with great new features and allows you to experience music like never before.”

Nativ Vita™ is the world’s first high-end music player with a 11.6” touchscreen and pioneering user interface to conveniently access all of today’s music.

Play popular streaming services such as Apple Music, Spotify or Tidal directly from the built-in LCD, and stream stunning music videos to your TV via HDMI or wirelessly with Google Cast.

Nativ Vita™ supports Apple Airplay, Spotify Connect, Google Cast and Bluetooth aptX® for seamless integration of your mobile devices, and plays music from your Mac, PC or NAS through its ultra-fast 802.11ac and Gigabit networking technology.

Network music libraries can also be navigated with the pre-installed music interface from Roon*.

Large music libraries can be stored directly on the built-in hard disk or SSD drives with up to 4TB capacity.

Nativ’s high-resolution LCD uses the latest IPS technology for a brilliant picture from any angle, and acts as a central control interface to stream high fidelity music to virtually any wireless headphone or speaker, including popular solutions like SONOS and Bose SoundTouch.

Audiophiles will appreciate the high-end digital output stage with independent ultra-low noise power regulators, galvanic isolation and a special in-line filter to eliminate jitter and noise from the audio signal.

All music is delivered in bit-perfect quality to your A/V receiver or DAC via the asynchronous USB interface or four high-quality outputs for SPDIF and AES/EBU. Nativ Vita™ is designed for High-Resolution Audio and supports playback of DSD up to 11.2896 MHz (Quad-DSD), DXD and PCM files up to 32-bit/384 kHz.

Nativ Vita™ is also the world’s first high-end music player to come with a built-in multidirectional microphone and innovative voice control. Simply tell it what to play, adjust the volume or skip to the next track.

With its giant touchscreen interface, innovative voice control and flexible connectivity Nativ Vita™ is predestined to become the central control point for your smart home.