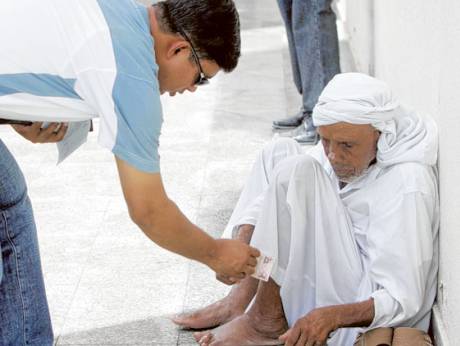 Dubai: The Dubai Municipality caught 59 professional beggars during the first three months of 2016, one of whom was making as much as AED270,000 per month.

It was revealed during the interrogation that he was collecting an average of AED9,000 per day.

According to a report in Khaleej Times, most of the beggars entered the United Arab Emirates legally either on business visa or 90-day tourist visa.

"Some of the beggars had passports issued with business or tourist visas. During the campaign, we found that the majority of beggars had entered the country legally with a three-month visa, in order to collect as much money as they could during their time here," Khaleej Times quoted Faisal Al Badiawi, Head of Markets Section at the municipality, as saying.

"More money was collected on Fridays when beggars stood in front of mosques," said Al Badiawi.

The beggars were caught during a campaign recently carried out by the Dubai Municipality in cooperation with the emirate's police.

Local authorities have been carrying out campaigns to combat begging along Dubai’s streets, particularly intensifying them during – and in the run up to – Ramadan.

Gulf News earlier reported that in 2015, Dubai Police arrested 197 beggars during their Ramadan anti-begging campaign, while 33 beggars were arrested by Sharjah Police.