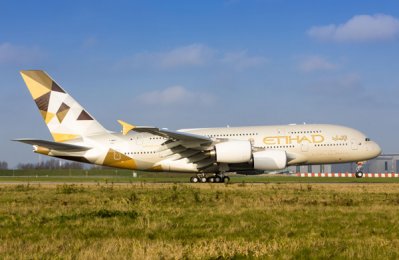 Etihad...official carrier for the tournament

This is the sixth year that Etihad Airways has been the official carrier for the tournament, which will take place from April 19 to 24 at the IPIC Arena.

The airline’s involvement forms part of its strategic partnership with Abu Dhabi Sports Council to promote improved engagement and participation in quality sports by all UAE residents and to advance Abu Dhabi as a global hub for sporting excellence.

Hareb Mubarak Al Muhairy, Etihad Airways senior vice president - corporate and international affairs, said: “Etihad Airways is extremely honoured to, once again, be the official airline of the Abu Dhabi World Professional Jiu-Jitsu Championship. The sport is extremely important to Abu Dhabi and the leadership of our nation and we are dedicated to supporting the tournament’s athletes as they continue to take Jiu-Jitsu to incredible new heights. Our partnership also forms part of our ongoing commitment to promote the emirate as a global tourism, sport and business capital.”

The Brazilian combat sport has continued to rise in popularity in recent years, and in 2008 was added to the national curriculum in schools across Abu Dhabi. One year later, the UAE Jiu-Jitsu Federation launched the first edition of the championship and since then the tournament has played an integral role in advancing the sport around the world, and further promoting the UAE as a great sporting nation.

Aref Al Awani, general secretary of the Abu Dhabi Sports Council, said:  “Over the past eight years, Abu Dhabi has cemented its position as a  world capital of Jiu-Jitsu and the 2016 tournament will be our greatest opportunity yet to showcase the immense talents of our nation’s Jiu-Jitsu fighters. The 2016 championship will excite and enthral fans of the sport whilst celebrating Jiu-Jitsu’s current and developing talent. The tournament is the perfect occasion for us to instil a love of Jiu-Jitsu amongst young Emiratis whilst inspiring our junior athletes to achieve their ambitions both on a local and international level.”

The 2016 championship is set to be the biggest to date with a generous prize fund of over Dh2.5 million ($680,509). A number of exciting events and interactive games will be on offer at the venue’s ‘family village’ for the duration of the tournament.

Etihad Airways will also host a series of activities at the IPIC Arena where visitors will be able to enjoy two popular simulators - an aeroplane and Formula One race car. The airline will also be giving away daily return flights to a number of destinations.  - TradeArabia News Service