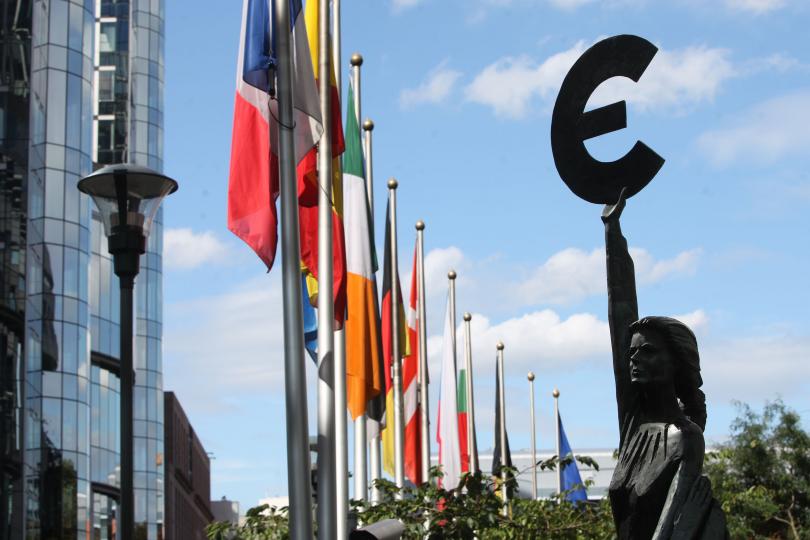 A statue holding the symbol of the euro stands in front of the European Parliament building in Brussels.

The EU unveiled plans Tuesday to force the world's biggest multinationals to faithfully report earnings and pay their fair share of taxes, saying the Panama Papers scandal added to the need for change.

The European Commission, the EU's executive arm, said under the new rules big companies operating in Europe would have to make public what they earn in each member state of the 28-nation bloc.

Country-by-country reporting has for years been a major demand of tax activists who accuse big corporations of secretly shifting profits from major markets to low tax jurisdictions, often through the use of shell companies such as those exposed in the Panama Papers leaks.

"The Panama Papers have not changed our agenda but strengthen our determination to make sure taxes are paid where profits are generated," EU Financial Services Commissioner Jonathan Hill told a news briefing at the European Parliament in Strasbourg, France.

Hill is a longtime political ally of British Prime Minister David Cameron who is one of many world leaders to have been caught up in the Panama scandal for ties to off-shore accounts.

Longstanding criticism of corporate tax policy blew up into the open with the Lux Leaks scandal in 2014, which exposed secret sweetheart tax deals given to huge corporations – including the likes of IKEA and Pepsi – by the small duchy of Luxembourg.

These companies are accused of recycling earnings from across the globe back through Luxembourg or other havens where authorities secretly allow them effective tax rates as low as two per cent.

The Brussels-based Commission said corporate tax avoidance in Europe cost an estimated 50 to 70 billion a year in lost government revenues.

"This proposal is a simple, proportionate way to increase large multinationals' accountability on tax matters without damaging their competitiveness," the Commission said in a statement.

The EU plan closely follows recommendations from the OECD agreed by G20 leaders last year. They would apply to all global companies with sales worth 750 million euros or above worldwide and with activities in the EU.

The EU said this amounts to about 6,000 companies – including 1,000 Asian firms – or 90pc of all corporations above that size.

Under the new conditions, companies will need to disclose information such as total sales, the nature of their business activity, profit before tax, tax actually paid and accumulated earnings. The data would be posted on a company's website.

The Commission toughened its proposal in the wake of the Panama revelations, requiring that the company data be available to the general public, not just the tax authorities.

"By adopting this proposal, Europe is demonstrating its leadership in the fight against tax avoidance," said Valdis Dombrovskis, the Commission's vice-president in charge of the single euro currency.

But business lobbyists complained that forcing companies to reveal sensitive data would scare off investment in Europe.

"We believe that these proposals, by making the EU a lone front runner in terms of public disclosure, risk undermining our attractiveness as a location for investment, particularly from overseas," said Markus J Beyrer, head of BusinessEurope.

The plans also include a commitment to establish an EU-wide blacklist of tax havens, which could prove a sensitive project given the close ties between certain EU members and suspected tax havens.

In a disappointment to tax campaigners, the EU plan is largely limited to activity in Europe, except if earnings come from a black-listed tax haven.

"As long as the proposal doesn't cover all countries, multinational corporations will still have plenty of opportunities to hide their profits," said Tove Maria Ryding, a tax specialist at the European Network on Debt and Development.

"So instead of solving the problem, this proposal would be moving the problem from one country to another, with multinationals still able to avoid taxes," she said.