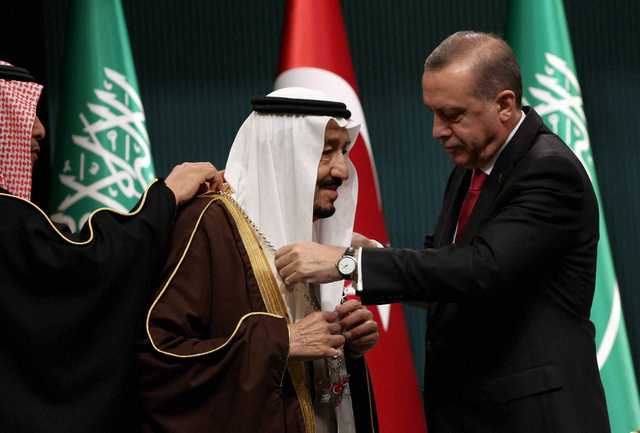 Erdogan decorates King Salman with the country's highest state medal in recognition of the close ties between the two countries, during a ceremony in Ankara, Turkey. (AP Photo)

Erdogan gave Salman Turkey's highest honour for a foreign leader and praised his role in developing relations between the two overwhelmingly Sunni Muslim powers since succeeding his half brother Abdullah in 2015.

"The fact that Turkey and Saudi Arabia are deepening their co-operation in every field, with your support, is an opportunity for regional and global peace," Erdogan told King Salman.

"Since the day you came to the throne, you made great contributions to relations between our two countries."

Erdogan greeted Salman at the vast new presidential palace with an honour guard of Turkish soldiers as well as 16 costumed warriors representing the various Turkic empires in history.

Mocked when they first appeared in 2015, the spear-carrying and mustachioed warriors are now regularly brought out for Erdogan's most honoured guests.

Erdogan on Monday personally welcomed Salman off his plane at Ankara airport, in an unprecedented departure from normal protocol.

The awarding of the Order of State, the highest honour presented by Turkey to foreign heads of state, was only the second time Erdogan had given out the decoration during his presidency.

Saudi Arabia and Turkey both believe the ousting of President Bashar Al Assad is the key to solving the Syrian conflict and back rebel groups fighting his regime.

The talks took place a day before negotiations in search of peace in Syria were due to resume in Geneva with a truce largely observed since February 27 under strain.

Turkey and Saudi Arabia have already repaired the damage to relations caused by Riyadh's role in the 2013 ousting of Egyptian president Mohammed Morsi, a close Ankara ally.

"It's Turkey's invisible entente in the sense that Turkey has built this very deep alignment with the Saudis in the Middle East," said Soner Cagaptay, director of the Turkish Research Programme at The Washington Institute.

Cagaptay said that King Salman's view that Sunni Muslims should unite in the face of the threat from Shiite Iran had helped eradicate "some of the differences the previous king (Abdullah) had with Turkey".

In February, Turkey began hosting Saudi jets and military personnel at its Incirlik air base to join the air campaign against Islamic State jihadists.

Cagaptay said this showed the alignment between Ankara and Riyadh – now comparable to Turkey's ties with Nato ally Washington – was "possibly now a fact of life for Turkish foreign policy."

Turkey has found itself with few reliable allies in the Middle East following the Arab Spring and is also enduring a crisis in its relations with Russia.

The lavish arrangements for Salman's visit have raised eyebrows in the Turkish press, with the king reportedly staying in a 450sqm hotel suite with bullet proof windows reinforced by bomb-resistant cement.

Saudi Arabia rented 500 luxury vehicles for his vast delegation and Turkish media images showed dozens of Mercedes travelling in a vast convoy down the closed highway.

The king's personal belongings had all been shipped to Turkey in cargo planes and a hundreds-strong delegation had laid the groundwork in Turkey before the king's arrival.

Salman now heads to Istanbul for the summit of the Organisation of Islamic Co-operation (OIC) on Thursday and Friday.