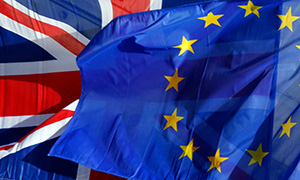 The IMF listed a Brexit as one of its seven main 'downside risks' to the world economy.

The warning by the International Monetary Fund (IMF) of the dangers of Britain leaving the EU lit a fire under the country's "Brexit" debate Tuesday, just days before official referendum campaigning begins.

Prime Minister David Cameron seized on a report by the world body warning that a so-called Brexit could inflict "severe regional and global damage", but his opponents condemned it as scaremongering.

"The planned June referendum on European Union membership has already created uncertainty for investors; a 'Brexit' could do severe regional and global damage by disrupting established trading relationships," it said.

Campaigners for Britain to remain in the 28-nation EU in the June 23 referendum have warned that leaving would be a "leap in the dark", and Cameron was quick to endorse the IMF's warning.

"The IMF is right – leaving the EU would pose major risks for the UK economy. We are stronger, safer and better off in the European Union," the British premier wrote on Twitter.

Finance minister George Osborne said the report represented "the clearest independent warning of the taste of bad things to come if Britain leaves the EU".

"If the British economy is hit by the mere risk of leaving the EU, can you imagine the hit to people's income and jobs if we did actually leave?" he said in a statement.

However, campaigners to leave the EU were just as quick to condemn the IMF, saying it had an "appalling record" on forecasting British economic growth.

Brian Monteith of the Leave. EU campaign group said the report was a "fantasy, based on false assumptions about imaginary trade wars".

Vote Leave chief executive Matthew Elliot added: "The IMF has talked down the British economy in the past and now it is doing it again at the request of our own chancellor.

"It was wrong then and it is wrong now."

He added: "The biggest risk to the UK's economy and security is remaining in an unreformed EU which is institutionally incapable of dealing with the challenges it faces, such as the euro and migration crises."

The pound has slumped since the announcement of the referendum date in mid-February, losing five pc of its value against the euro and falling to a seven-year low against the dollar at the end of February.

In its report, the IMF listed a Brexit as one of its seven main "downside risks" to the world economy.

"Negotiations on post-exit arrangements would likely be protracted, resulting in an extended period of heightened uncertainty that could weigh heavily on confidence and investment, all the while increasing financial market volatility," the report said.

The intervention comes just days before the official campaign period for the referendum begins on Friday, although the debate is already in full swing.

Opinion polls suggest the British public are deeply divided over whether to stay in the EU, and the campaign has also split Cameron's cabinet, after five senior ministers came out in favour of Brexit.