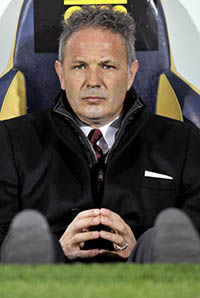 Milan: AC Milan have announced the sacking of coach Sinisa Mihajlovic, replacing the Serbian with youth team boss Cristian Brocchi until the end of the season.

A statement from the struggling Serie A giants yesterday read: “Sinisa Mihajlovic has been relieved of his role as AC Milan coach.

“The club would like to thank Mihajlovic for the dedication and hard work carried out this season.

“Cristian Brocchi will now be in charge of the first team until the end of the season. AC Milan would like to welcome Mr Brocchi and wish him all the best.”

Speaking after Saturday’s 2-1 loss to Juventus, Serbian Mihajlovic acknowledged he could be fired.

“This year at Milan I’ve felt removed, not because of the pressure from what’s been written,” he said.

“I believe in myself but in trying to find the right solutions I feel we’ve tried everything.

“Like every other coach in the world, I’m judged on the work done and results obtained.

“If in the seven remaining matches, also the Italian Cup, or even before, if we mess up it’s right for the coach to be the first to pay for it.

“It’s always been that way. I’ve always said, there are two categories of coach, those that have been sacked and those that will be sacked.”

Mihajlovic, 47, lasted only eight months in the job after replacing former club and Italy striker Filippo Inzaghi but failed to resurrect the flailing giants’ past glories.

Milan currently lie sixth following Saturday’s home defeat to the reigning champions and leaders, who they will face again in next month’s Italian Cup final.

They sit a point above Sassuolo in the race for the final European qualification position with six games to play but are 15 points behind Roma in the final Champions League spot.

Mihajlovic was given a clear mandate when he arrived at the start of the season: qualify for the Champions League, something Milan now have no realistic chance of doing.

Since last winning the league in 2011, they finished second a year later, third in 2013 but then eighth and tenth in the two subsequent campaigns.

According to Italian media, the decision to fire Mihajlovic came during a conversation between club owner Silvio Berlusconi and CEO Adriano Galliani on Monday night.

Mihajlovic, who was hired for his fighting spirit, has been linked with a move to Lazio.

Under his tutelage, Milan won just 13 of 32 Serie A matches, losing nine times and drawing the other 10.