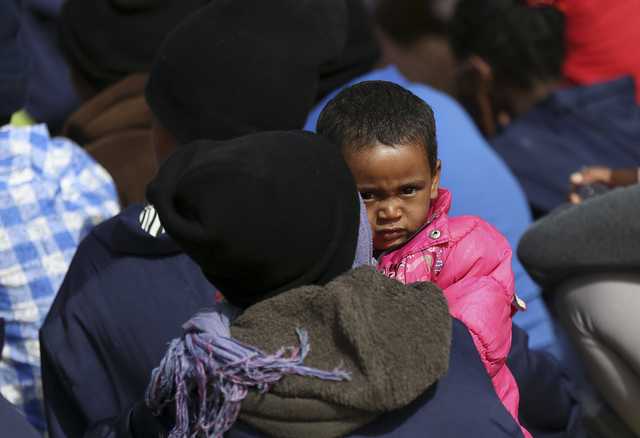 A woman holds a baby as they sit on the dock after disembarking from the German naval vessel Frankfurt Am Main in the Sicilian harbour of Augusta. (Reuters Photo)

Italy's coastguard said Tuesday it had rescued some 4,000 migrants in the past two days, adding to fears of a fresh push to reach Europe via that route as the number of migrants landing in Greece sharply recedes.

A total of 2,154 migrants were brought to safety in the Strait of Sicily between Italy and north Africa, on top of the 1,850 rescued in the area on Monday, the coastguard said.

A vessel from the EU border agency Frontex and a Greek cargo ship assisted the Italian navy in conducting a total of 25 rescue operations involving 16 dinghies and a rowing boat, officials said. All the passengers survived.

War-torn Libya is the main jump-off point for migrants trying to reach Europe from north Africa.

A spokesman for the Libyan navy said that country's coastguard intercepted a further six inflatable boats carrying 649 migrants off Sabratha, near Libya's border with Tunisia, on Tuesday.

On Monday, 115 migrants had been rescued by Libyan authorities after their boat got into trouble near the capital Tripoli.

The arrivals represent a sharp increase on the average daily numbers landing in Italy since the start of the year.

According to the United Nations, 19,900 migrants have crossed the Mediterranean to Italy so far this year, compared with 153,000 landing in Greece.

Calmer seas at the onset of spring are encouraging greater numbers of migrants to attempt the perilous crossing to Italy after a winter lull.

There are also concerns that European efforts to shut down the migrant sea crossing from Turkey to Greece will encourage more people to attempt the more dangerous Mediterranean passage from Libya to Italy.