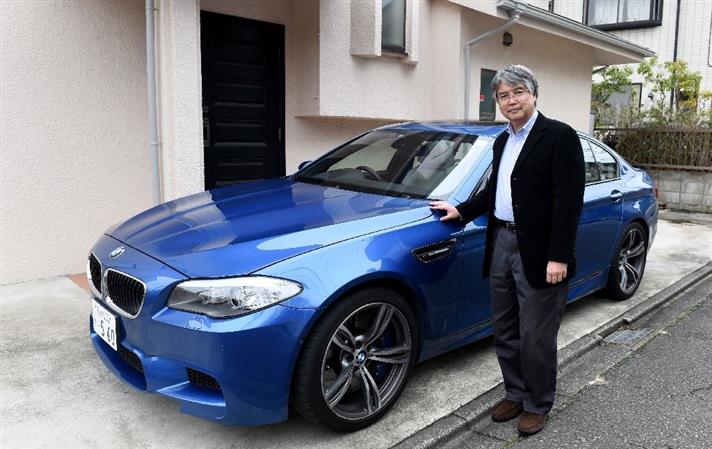 Tokyo: Tokyo businessman Randal Furudera isn't about to swap his German-made BMW M5 for a "boring" Japanese car, although he'll give them some grudging respect for their ho-hum dependability.

Deep-pocketed buyers like Furudera are driving sales in Japan of high-end foreign brands, which dominate the niche sector in a car market long seen as all but shuttered to overseas automakers.

"Most Japanese cars these days are sort of becoming moving appliances," the 54-year-old told AFP.

"They're very reliable, they're good quality, they never break and all that, but they're not very interesting to drive."

Mid-range foreign vehicles are a rare sight on Japanese streets, but it isn't hard to spot a Porsche zipping around the capital or a nouveau riche billionaire behind the wheel of a half-a-million dollar Lamborghini.

Sales of the Italian sportscar in Japan doubled to about 300 vehicles in 2015 from a year earlier.

The jump comes as US car giant Ford announced in January it was quitting the country, blaming the "closed" market, after it sold fewer than 5,000 cars in 2015.

Less than six percent of the more than five million vehicles sold last year in Japan -- the world's number three car market -- were made by foreign automakers.

US auto unions have blasted what they say are non-tariff barriers that shut the door on a sector already dominated by eight domestic carmakers, including Toyota, Nissan and Honda.

In 2013, former Ford boss Alan Mulally accused Tokyo of manipulating the yen's sharp decline to gain a trade advantage for domestic firms, which sell millions of vehicles overseas, including top markets China and the United States.

"When did we beat Japan at anything?" Trump said in a speech last summer to announce his run for the presidency.

"They send their cars over by the millions, and what do we do? When was the last time you saw a Chevrolet in Tokyo? It doesn't exist, folks."

Trump is not far off -- Chevrolet and Cadillac maker General Motors sold a puny 1,600 vehicles in Japan last year.

But it's a different story for prestige foreign brands, whose success didn't come without a fight.

They had to "overcome stereotypes like Western cars break down easily or they're expensive to repair", said Miki Kurosu, communications director for BMW Japan, which sold about 46,000 vehicles last year, along with 21,000 Minis.

Japan's luxury car market has remained frothy despite a years-long downturn in the economy, while a stock market rally in recent years has also helped buoy sales.

Nissan considered selling its high-end Infiniti brand at home, as Honda did with Acura. But those plans were scrapped owing to foreign automakers' dominance in the market.

Meanwhile, rival Toyota has struggled to score big with its Lexus in Japan, although sales have been on an upswing lately.

"Lexus is a bit behind. They had great ambitions when they launched the brand (at home) in 2005, but have not achieved their goals," said Yoshiaki Kawano, an auto analyst at IHS Automotive.

German brands have slick marketing campaigns and a top-notch image in Japan, and rich drivers rarely switch brands so domestic automakers were late to the party.

"There is quite a bit of prestige attached to certainly the three main German brands," said Furudera.

Foreign brands tend to focus on the driving experience, rather than just passenger comfort, added the car enthusiast.

In Japanese cars, "(passengers) are probably enjoying it more than the drivers -- watching DVDs, getting a massage from their chairs -- but the driver is not enjoying it that much", Furudera said.

"In a German car, the driver gains the most -- that's kind of the big difference."

While he may consider buying a Lexus down the road, it's not likely to happen any time soon.

"I wouldn't say never, but for now I think BMW still has the edge in terms of driving experience."