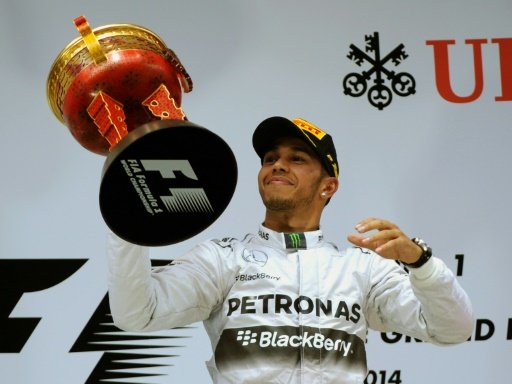 Lewis Hamilton is still searching for the swashbuckling form that swept him to victory last year when he dominated at the Chinese GP. (AFP Photo)

Shanghai: Formula One world champion Lewis Hamilton faces a severe test of his mental strength in China this weekend as he tries to halt Nico Rosberg's blistering start to the season.

The Briton, who is chasing a third successive victory in Shanghai, denies his Mercedes team-mate has struck a psychological blow by winning the first two races, insisting the early skirmishes count for little with 19 grands prix left in a championship with more rounds than ever.

But Hamilton has failed to win since securing his third world championship in Texas last October, while German rival Rosberg, who has opened up a 17-point lead over his fierce rival, has now won the past five races dating back to last year.

"I couldn't care less if he's won the last five," sniffed Hamilton, who was rammed by the Williams of Valtteri Bottas at the first corner before finishing third behind Kimi Raikkonen's Ferrari in Bahrain two weeks ago, despite starting on pole for the second race in a row.

Worryingly also, Mercedes boss Toto Wolff has warned that the clutch problems that have sabotaged Hamilton's starts, setting him back in the first two races, might not be fixed in time for China.

Despite his problems, Hamilton is unlikely to suffer a crisis of confidence -- nor will he be enlisting the help of sports psychologists as he attempts a fifth win in China, after recently dismissing the practice of hiring driver coaches as a "bunch of crap".

Rosberg will be buzzing after a superb drive at Bahrain's desert circuit, and the German will know that victory in Shanghai could put real pressure on Hamilton.

Raikkonen showed genuine pace in Bahrain but Ferrari will be concerned about reliability after Sebastian Vettel's engine blew on the warm-up lap, the second successive race they have suffered mechanical failure.

American newcomers Haas will be looking to build on their impressive start to the season after Romain Grosjean's fifth place last time out, while Fernando Alonso hopes to be passed fit to return for McLaren after his horror crash in Australia.

Cash-strapped Sauber have secured a sponsorship advance from their Swedish backers to pay staff salaries and take their place on the grid in China, a reminder of the financial demands on F1 outfits.

Meanwhile, rebellious teams have forced the sport's governing body to revert to the 2015 qualifying format after the fiasco caused by the new system in Australia and Bahrain.

The Chinese race will see a return to last year's qualifying system after the experiment with 'progressive elimination', where cars were steadily knocked out, often left fans staring glumly at an empty track.