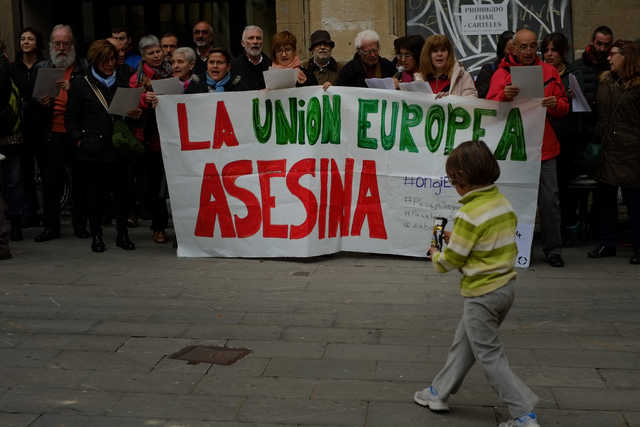 A young girl walks past a banner that reads, ''The European Union murderous'', during a march in support of refugees and migrants entering Europe, in Pamplona, northern Spain. (AP Photo)

Spanish police said Wednesday they had detained a man who may have supplied weapons used in the deadly jihadist attacks in Paris in January 2015.

Antoine Denevi, who is from a small town in northern France, was detained in the southern Malaga area under a Europe-wide arrest warrant, the police said.

They said 27-year-old Denevi's alleged trafficking ring supplied "arms and war munitions" to Amedy Coulibaly, who on January 8 and 9 last year shot dead a policewoman and took hostages in a Jewish supermarket, where he killed four people.

But prosecutors in the northern French city of Lille – where Denevi is being investigated for arms trafficking – played down a direct link with the Paris attacks.

"For the moment, there is no link... between accusations that may be levelled against him and the weapons used in the Paris attacks in January 2015," they said.

Both Spanish and French police participated in Tuesday's operation in the seaside resort of Rincon de la Victoria, during which two other people were also detained – one from Serbia and the other from Montenegro.

In their statement, Spanish police said Denevi "left the neighbouring country (France) weeks after the Paris attacks to escape police action, and settled in the province of Malaga from where he continued his illegal activities using fake papers."

"It's also been determined that his activities were linked with people of Serbian origin, who may have facilitated his access to arms and munitions."

Denevi, who hails from the northern French region of Pas-de-Calais, was immediately taken to Madrid, where he was brought before a judge in the National Court.

The National Court, which hears cases related to extremism, charged him with arms trafficking but so far no terrorism charges have been brought against him.

A judicial source, who wished to remain anonymous, said the suspect had denied selling weapons to jihadists and accepted to be extradited to France.

Coulibaly was an accomplice of the Kouachi brothers who killed 12 people in an attack on the offices of satirical magazine Charlie Hebdo in Paris two days before he held up the supermarket.

He had pledged allegiance to the Islamic State (IS) group, while the Yemen-based Al Qaeda in the Arabian Peninsula claimed the brothers' attack on the magazine.

All three gunmen were shot dead by police.

Spanish police recalled that Coulibaly visited Spain just days before the attacks to accompany his partner, Hayat Boumeddiene, to Madrid airport to catch a flight to Turkey from where she made her way to Syria.

She is currently "fully integrated in the operational structure" of IS in Syria, Spanish police said in their statement.

The three days of attacks in January 2015 shook France, prompting much soul-searching about how three French youths could gun down 17 fellow citizens in cold blood.

The trio had very specific targets – cartoonists who had mocked the Prophet Mohammed in Charlie Hebdo's pages, the police and Jews.

Coulibaly was shot dead in the Jewish supermarket on January 9 in a dramatic raid by French special forces.

The Kouachi brothers were also killed by special forces in a near simultaneous assault on a printing factory just outside Paris where they had holed up.

The three-day killing spree was, at the time, the worst extremist attack on European soil in nearly a decade, but jihadists hit Paris again in November, killing 130 people.