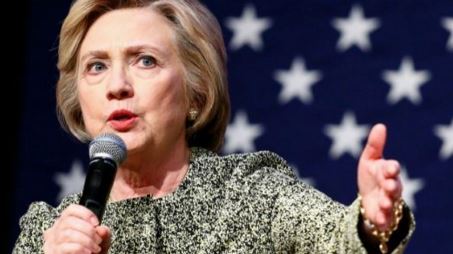 New York: Hillary Clinton and Bernie Sanders face off on Thursday in a closely watched US presidential debate ahead of the key New York primary in the increasingly acrimonious Democratic race for the White House.

The former secretary of state holds a double-digit lead over the Vermont senator in polls and needs a big win in next Tuesday's primary after losing seven of the last eight contests to her leftist rival.

The Brooklyn-born, self-described Democratic socialist is similarly dreaming of a shock win in Clinton's adopted home state to keep alive his dream of wresting the nomination from the Democratic frontrunner.

It makes for a dramatic showdown in a state in which both claim close ties. New York is the state that elected Clinton twice to the US Senate, and Sanders was born and brought up in Brooklyn.

"I think it will be lively," Clinton predicted of the debate -- their first since March 9 and scheduled at Sanders' insistence, looking to close his trailing gap behind the former first lady.

Addressing a huge rally in New York's Washington Square on Wednesday, Sanders attacked Clinton for her ties to Wall Street, her support for trade deals that have cost US jobs and for the 2003 Iraq invasion.

"This is going to be tough primary for us but when I look at the thousands of people who are here... I think that if we have a large voter turnout on Tuesday we're going to win this state," he said.

Sanders, whose call for a revolution has ignited a passionate youth following, was forced to backtrack after questioning Clinton's qualifications for the nation's top office.

Clinton has lashed out at Sanders over gun control and immigration reform, and accused him of dodging questions on the campaign trail.

Thursday's debate will be moderated by CNN and kicks off at 9:00 pm (0100 GMT Friday) at the Duggal Greenhouse, a fashionable venue that has hosted events for the likes of Alexander Wang and Lady Gaga.

Clinton has a commanding advantage over Sanders with 1,790 delegates to his 1,113. A total of 2,383 delegates are needed to secure the party's nomination for the presidency inm the party's convention this summer.

There are 291 Democratic delegates up for grabs in New York, where minorities and wealthy Democrats are likely to favor Clinton, although Sanders appears to have cut into her lead in more economically disadvantaged communities, white males and young voters.

"The younger voters are feeling the 'Bern' but the question is, will they come out and vote in large numbers, as older voters historically do?" said Siena College pollster Steven Greenberg.

The rules of the New York primary are also likely to favor Clinton. Only those previously registered with the Democrat or Republican party can vote, and only for a candidate running on that party's ticket.

Primaries open to independent voters typically favor Sanders, the longest serving independent member of Congress in the United States, who appeals to floating voters as well as progressive Democrats.

The upshot is that New York, an overwhelmingly Democrat state whose primaries traditionally have little influence on presidential elections, may play its most decisive role in decades.

With Republican frontrunner Donald Trump potentially facing a contested nomination and Clinton a tighter national race than she would have liked, the votes on both sides could prove decisive.

While the Democrats debate, the Republican candidates will be guests at a Republican gala at a posh Manhattan hotel.