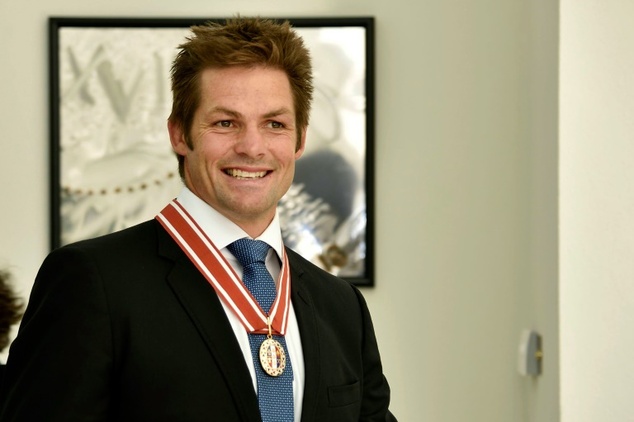 All Blacks legend Richie McCaw was bestowed with the Order of New Zealand (ONZ) which recognises 'outstanding service' to the country. (AFP Photo)

Wellington: All Blacks legend Richie McCaw said he was humbled to receive New Zealand's top civic honour on Thursday, but also relieved he does not have to adopt the title "Sir Richie".

McCaw was bestowed with the Order of New Zealand (ONZ), which recognises "outstanding service" to the country and is restricted to 20 living members at any one time.

It sits higher in the honours system than a knighthood -- but does not include the title "Sir" and is not awarded with a ceremonial tap on the shoulder with a sword.

Instead, the world's most capped international rugby player simply bowed his head as Governor General Jerry Mateparae hung the order's modest badge around his neck in Wellington.

McCaw, who led New Zealand to back-to-back World Cups in 2011 and 2015, described himself as "an ordinary Kiwi" and was pleased to keep the pomp and ceremony to a minimum.

Still just 35 and less than six months into his retirement from international sport, McCaw said he would have faced a ribbing from friends if he became Sir Richie.

"As a young man you still want to be able to integrate yourself with your mates as normal and not having a title like that actually makes it somewhat easier," he told reporters.

"The fact that it didn't come with the title of 'Sir' sat with me a lot more comfortably."

He said the honour ranks alongside the best of his stellar career, because it was recognition from his fellow New Zealanders.

"This would be right up at the top, you can't get any bigger than this. To be recognised by your country, it's pretty cool," he said.

McCaw becomes the youngest holder of the title, eclipsing former prime minister and World Trade Organisation director-general Mike Moore, who was 50 when he was made a member.

Others on the list include another former All Black captain Brian Lochore, director Peter Jackson and former prime minister Helen Clark, who is now in the running to become United Nations secretary-general.

During a 15-year career, the flanker played a world record 148 Tests and only tasted defeat 15 times.

"I've probably got myself busier than I intended straight away, but there's things I want to do that I find enjoyable," he said.