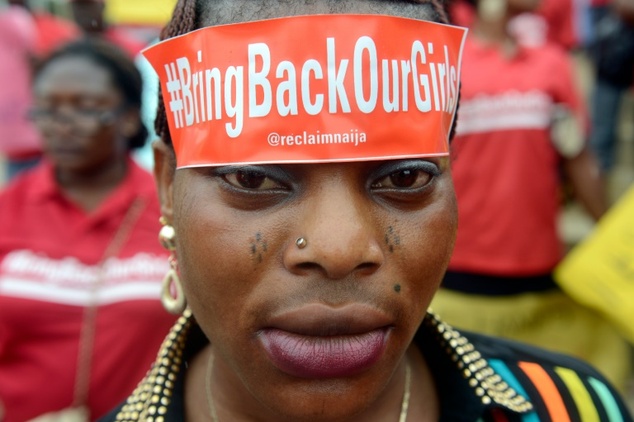 A woman with a sticker on her head bearing the slogan 'Bring back our girls' marches in Lagos on May 29, 2014. (AFP File Photo)

Kano, Nigeria: Boko Haram has sent a "proof of life" video which shows 15 of the more than 200 girls abducted by Islamist fighters from the northeast Nigerian town of Chibok two years ago, CNN reported on Wednesday.

The video showed the girls wearing black hijabs in an unspecified location, stating their names, that they were taken from Chibok and the date of the recording -- December 25, 2015, the broadcaster said.

Two of the three mothers of the 219 schoolgirls still missing since the mass abduction on April 14, 2014 recognised their daughters on the video but another broke down as hers was not there.

All three, however, identified all the girls, as did a classmate, who was at home on the day of the kidnapping.

The video is the first concrete indication that at least some the girls are still alive since a previous video released publicly by Boko Haram in May 2014.

Then, about 100 of the teenagers were shown in Islamic dress, reciting passages from the Koran after Boko Haram leader Abubakar Shekau said they had converted to Islam.

Nigeria's information minister Lai Mohammed told CNN the girls in the video appeared "under no stress whatsoever" and there had been "little transformation in their physical appearance".

But he declined to comment directly on the state of talks with Boko Haram, which has previously said it would release the girls only in exchange for captured fighters in Nigerian prisons.

"There are ongoing talks. We cannot ignore leads but of course many of these investigations cannot be disclosed openly because it could also endanger the negotiations," the minister added.

AFP understands from a go-between that in mid-January this year, members of Boko Haram made contact with the government, requesting talks about a possible prisoner swap.

The militants then sent five still photographs of some of the girls, also wearing black hijabs, who were identified by some parents as being among those kidnapped from Chibok.

The government then requested more concrete proof in the form of a video, which was then sent.

Parents of the 219 girls were on Thursday set to hold a prayer vigil at the Government Girls Secondary School in Chibok to mark the second anniversary of the kidnapping.

Boko Haram seized 276 from their dormitories but 57 managed to escaped in the hours that followed.

Amnesty International's Nigeria director M.K. Ibrahim called for the release of all captives and said the Chibok girls symbolised "all the civilians whose lives have been devastated by Boko Haram".

"(President) Muhammadu Buhari's government should do all it lawfully can to bring an end to the agony of the parents of the Chibok girls and all those abducted," he added.

Nnamdi Obasi and Ayo Obe, of the International Crisis Group, described the anniversary was an opportunity to address the conflict's effect on children as more areas are freed from Boko Haram's control.

"The currently haphazard approach to the rehabilitation of rescued captives has left most of them psychologically, socially and culturally vulnerable," they added in an article published on blog.crisisgroup.org.

Human Rights Watch said this week some 952,000 of the 2.6 million people displaced by the violence were children, who had been "robbed" of their right to education by attacks on schools.

UNICEF said separately there had been a sharp rise in the use of abducted children as human bombs. Three-quarters of the child bombers in attacks from January 2014 to February 2016 were girls.

Elsewhere in Nigeria, protest marches were planned as the culmination of a week-long series of events organised by the #BringBackOurGirls movement to renew calls for the girls' release.

The Chibok girls are the most high-profile victims of the brutal insurgency, which has seen Boko Haram repeatedly use kidnapping as a weapon in a war that has killed some 20,000 people since 2009.

Human rights groups estimate that several thousand women and young girls have been seized since the start of the insurgency, and forced to become sex slaves and suicide bombers.

Young boys and men have also been forcibly conscripted to fight for the rebels, who want to create a hardline Islamic state in northeast Nigeria.