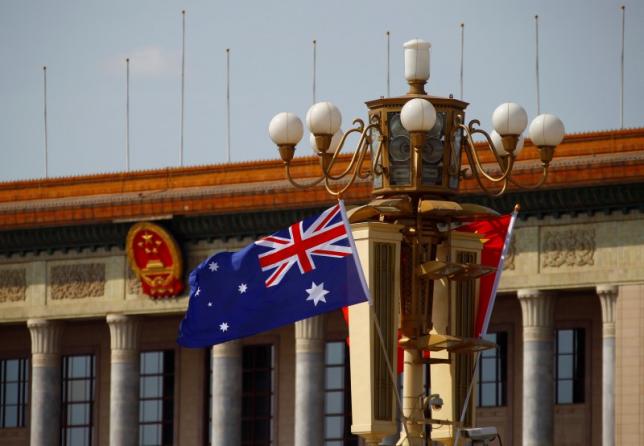 An Australian national flag flutters next to a Chinese national flag in front of the Great Hall of the People at the Tiananmen Square in Beijing April 9, 2013. (Reuters Photo)

To increase visits by Chinese citizens to Australia the government will for the first time offer visa applications in Chinese and allow online applications, he said as he kicked off a visit to China focused on economic ties.

"We're also trialling 10-year validity visas, again for the first time, here in China," Turnbull said in the commercial hub of Shanghai, without specifying what class of traveller was involved.

There was no indication whether the concession was reciprocal.

Australia is one of the few developed economies to run a trade surplus with China, thanks to purveying of raw materials such as iron ore on a gigantic scale, but it is seeking to diversify its resources-weighted economy in the face of falling commodities prices.

The country valued its bilateral trade with China at Aus$150 billion ($115 billion) last year, and the two nations in December put into effect a free trade agreement, which opens markets further.

According to Chinese Customs figures, Australia had a trade surplus of around $33 billion with the country in 2015.

Despite Australia's financial dependence on the world's second-largest economy, it remains a staunch political ally of the United States in the Asia-Pacific. Washington is reportedly in talks to station strike bombers in Australia, a US general said in March, amid concerns about Beijing's moves in the disputed South China Sea.

Turnbull made little mention of divisive political issues in his public remarks in Shanghai though he mentioned China's "long journey" towards the rule of law.

The prime minister -- who was accompanied by a giant business delegation -- praised China's economic development but acknowledged the impact of its slowing growth.

"We have to work harder, much harder, to strengthen and expand these business links, as our economies continue to transition," Turnbull said in speech at a business event.

"I'm here to help Australian exporters open doors which had been locked," he said, adding his government was watching the implementation of recently announced rules regarding tax on cross-border e-commerce transactions.

Turnbull also witnessed the signing of an agreement which aims to bring Australian rules football to China with a match in 2017.