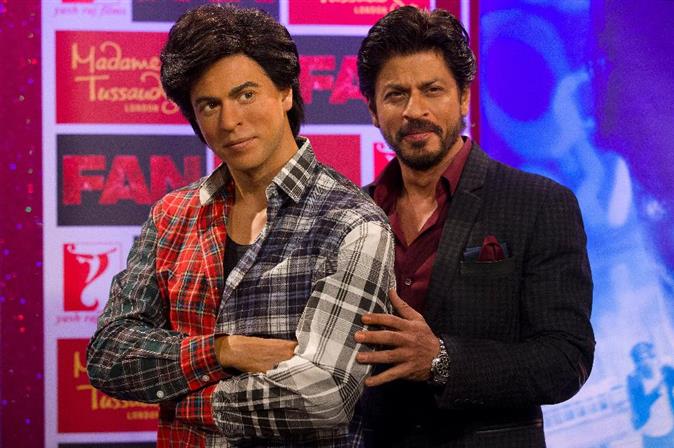 Shah Rukh Khan (R) poses with a wax figure of himself at a photocall at Madame Tussauds to promote his upcoming film ‘FAN’ in London on April 13, 2016. (AFP Photo)

London: Shah Rukh Khan unveiled a new version of his famous wax figure at Madame Tussauds here to promote "Fan", which is all set to release on Friday.

In the new version, SRK's wax statue has been dressed as Gaurav, the character of an obsessive fan from the movie. The model will be open to public viewing at the London Eye, which is a first for any wax statue.

Describing the experience of playing two different roles (Gaurav Chandana and superstar Aryan Khanna) as "schizophrenic," SRK, 50, said when he watched the film, he failed to relate to Gaurav.

"It was awkward and strange to watch the twenty-something character onscreen," he told reporters.

With "Fan," SRK returns to a genre he hasn't experimented with in years.

He shot to fame with "Anjaam" and "Darr" where he played obsessive characters that established him as one of the promising newcomers of the time.

Gaurav's bitterness towards his favourite cine idol is what makes the premise interesting in "Fan", the actor said.

"He (Gaurav) starts getting disappointed, which turns his whole life around. So, there is a darker side where it leads to an aggressive obsession and little bit of a revenge kind of a story. It's a completely new subject, never tackled before and very, very interesting," he said.