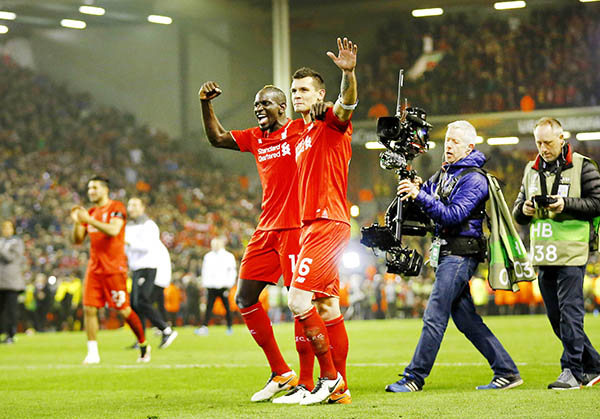 Liverpool’s Lovren and Sakho celebrate after the victory over Dortmund.

London: Liverpool added another fairytale comeback to their history books as they fought back from 3-1 down against Borussia Dortmund to reach the Europa League semi-finals after Dejan Lovren’s stoppage-time winner secured a 4-3 win last night.

Lovren rose at the far post to head home in the first minute of added time, recalling memories of Liverpool’s 2005 Champions League final comeback against AC Milan and propelling them into the last four with a 5-4 aggregate victory.

Liverpool will be joined in today’s draw by Villarreal, who beat Sparta Prague 4-2 and 6-3 over two the legs and Shakhtar Donetsk who won 4-0 at home to Braga to complete a 6-1 aggregate triumph.

Holders Sevilla, bidding for a third straight title, won 5-4 on penalties after being taken to extra time by Spanish rivals Athletic Bilbao.

Liverpool’s victory at Anfield was greeted by typically exuberant celebrations from manager Juergen Klopp, who spent seven years at Dortmund and would have been no stranger to the quick-fire counter attacks that earned the visitors a 2-0 lead.

Henrikh Mkhitaryan and Pierre-Emerick Aubameyang had seemingly given Dortmund an unassailable advantage, before Liverpool gained a foothold when Divock Origi poked home early in the second half.

Their spirits were swiftly dampened, however, when Marco Reus made it 3-1 after 57 minutes, before hope was restored through Philippe Coutinho’s curling effort.

The Anfield roar then went into overdrive when Mamadou Sakho levelled with 12 minutes remaining and the final blow was delivered when Lovren rose to head James Milner’s cross into the net.