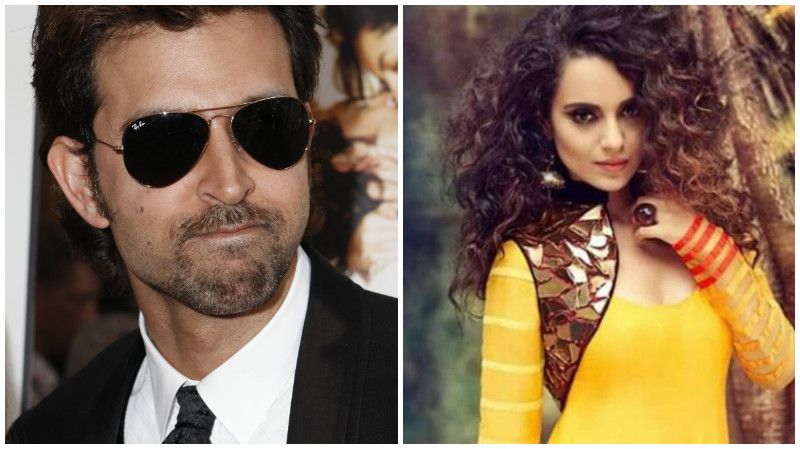 Mumbai: The Hrithik-Kangana row intensified on Thursday with the actress questioning why police was selectively calling witnesses and the actor asking her to cooperate in "everyone's interest" so that the truth can come out.

In a letter to the cyber crime cell of Mumbai police, Kangana alleged that police personnel were giving "false and misleading statements" to the media.

"I have in my letter to the DCP, questioned the police on various aspects... the first thing that I have asked them is that when Hrithik Roshan in his complaint made to the Police in December 2014, claims to have gained knowledge of an imposter from many people including his fans and people from the film industry then why has no one has been questioned till now in the said matter," Kangana's lawyer Rizwan Siddiquee said in a statement.

"This could mean only one thing i e either Hrithik Roshan publicly lied about various people giving him information about an imposter or the police did not do their job diligently as was required under Section 154 of CRPC, and close the matter by filing an appropriate report in time," he said.

When contacted, Hrithik's lawyers said, "It's in everyone's best interest to cooperate with police, so the true facts come out. What is true, what is false, is to be decided by police and the courts and not through the media. As a law- abiding citizen, Kangana should cooperate with authorities like Hrithik is doing."

Hrithik, 42, had sent a legal notice to Kangana, 29, asking her to tender a public apology for having purportedly referred to him in an interview as "silly ex" and refuted her claim of the two having had a relationship.

The actor had accused the "Queen" actress of sending up to 50 e-mails a day, some of them explicit in nature, whereas Kangana has alleged that he had hacked into her email account to delete mails that could have complicated his divorce proceedings with his then wife Suzanne Khan.

In her response Kangana charged him of a clumsy attempt to cover up their relationship.

The actress said she was not "some dim-witted teenager who has been smitten and that whatever happened between the two of them was with full consent of both parties."

In a letter to the police, Kangana's lawyer has written, " "Hrithik has otherwise claimed in his notice that he had gained knowledge of an imposter in the month of May 2014.

"Therefore, in the last two years there was no hurry to find any imposter, so suddenly why is there so much chaos. It is obvious that these are efforts to deviate media attention from the main subject matter."

The lawyer claimed the police is yet provide them a certified FIR copy as per the law.

"I have in my letter to the DCP also made a complaint against anonymous police source who is giving false and misleading statements to the press.

"Recently there have been media reports that my client has been called upon to hand over her laptop. I am shocked by these reports as my client has never given any statement that she ever used her laptop to communicate with any alleged imposter therefore where are these reports coming from," Siddiquee said.