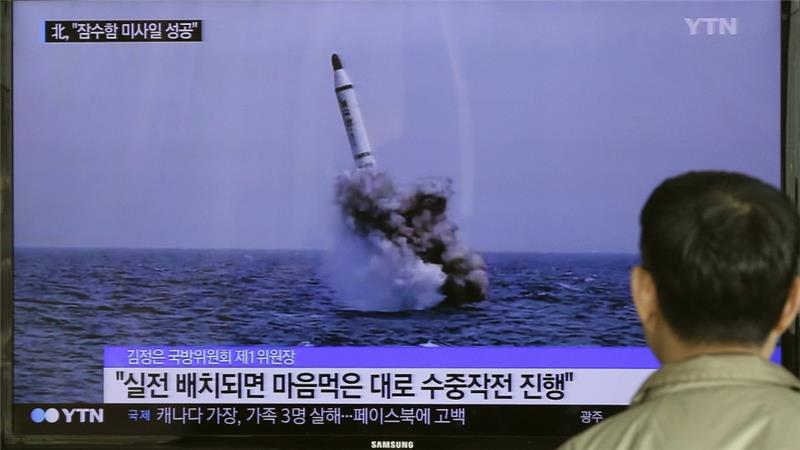 Seoul: North Korea tried and failed on Friday to test-fire what appeared to be a medium-range missile on the birthday of founding leader Kim Il-Sung, the United States said, denouncing the move as another needless provocation.

The missile disappeared from surveillance radar a few seconds after its launch and is believed to have exploded midair, according to a Seoul intelligence official quoted by Yonhap news agency.

There had been widespread intelligence reports in recent days that the North was preparing for the first-ever flight test of its Musudan missile, which is believed to be capable of striking US bases on the Pacific island of Guam.

The US and South Korean militaries both detected and tracked the early morning test. A US defence official said the missile was "presumably" a Musudan.

On board a US aircraft carrier in the South China Sea as part of a regional tour, US Defence Secretary Ashton Carter hit out at North Korea for raising tensions.

"The North Korean missile launch, which we assessed was unsuccessful, was nevertheless another provocation by North Korea in a region that doesn't need that kind of behaviour," Carter told reporters.

The April 15 birthday of Kim Il-Sung -- the grandfather of current ruler Kim Jong-Un -- is a major public holiday in North Korea, where key political anniversaries are often marked with displays of military muscle.

The country is also gearing up for a rare and much-hyped ruling party congress next month, at which Kim Jong-Un is expected to take credit for pushing the country's nuclear weapons programme to new heights.

Pyongyang has hailed a series of achievements in recent months, including miniaturising a nuclear warhead to fit on a missile, developing a warhead that can withstand atmospheric re-entry, and building a solid-fuel missile engine.

Last week, it said it had successfully tested an engine designed for an inter-continental ballistic missile (ICBM) that would "guarantee" an eventual nuclear strike on the US mainland.

Outside experts have treated a number of the claims with scepticism, while acknowledging that the North's nuclear and ballistic missile programmes have both made significant strides.

If Friday's failure is confirmed as a Musudan test, it would mark a very unwelcome public failure and fuel doubts about just how far the North has gone in developing a reliable nuclear delivery system.

"We are monitoring and continuing to assess the situation," another US official said, calling on North Korea to "refrain from actions that further raise tensions in the region."

Anxiety has been high on the divided Korean peninsula since Pyongyang conducted its fourth nuclear test in January and a rocket launch a month later that was widely seen as a disguised ballistic missile test.

The UN Security Council responded with its toughest sanctions to date, angering the North, which has since made repeated threats of attacks targeting the South and the US.

Existing UN resolutions forbid North Korea from the use of any ballistic missile-related technology.

But the North has defied the sanctions by test-firing nearly 20 short- or mid-range missiles off its east coast since early March, in a show of force against the South-US joint army drill that kicked off in the same month.

Pyongyang, with the series of provocations, is trying to prove that the UN sanctions are ineffective in curbing its weapons development, said Seoul's unification ministry, which handles cross-border affairs.

"They are trying to divide opinions of the international community by pushing more people to think that we... need dialogue with the North," ministry spokesman Jeong Joon-Hee said.

The nuclear-armed state has staged many short- and mid-range missile launches over the years but has yet to test the Musudan, which has an estimated range of anywhere between 2,500 and 4,000 kilometres (1,550 to 2,500 miles).

The lower range covers the whole of South Korea and Japan, while the upper range would include US military bases on Guam.

The Musudan was first unveiled as an indigenous missile at a military parade in Pyongyang in October 2010.