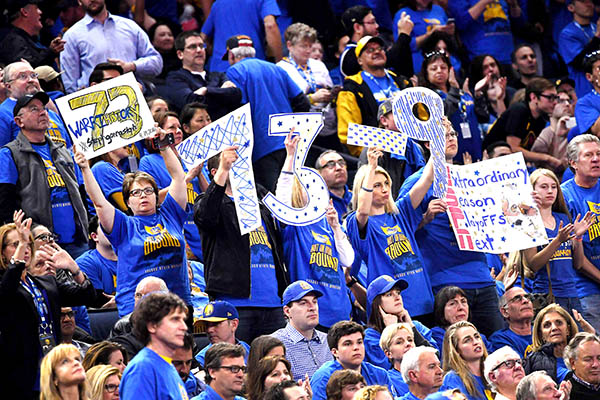 Warriors fans hold signs in the second half during the game against the Grizzlies in Oakland last Wednesday. The spotlight will be on the Warriors when the playoffs begin tonight

NEW YORK: When the 1995-96 Chicago Bulls set the former record of 72 wins in one season they coined an accompanying phrase: “72-10 don’t mean a thing without the ring.”

The Golden State Warriors are inclined to agree, and as the NBA playoffs open tonight they know their historic 73-win regular season will lose its lustre unless they end the campaign with championship jewellery.

Shrugging off such a hypothetical, Golden State, whose coach Steve Kerr played on the 72-win Bulls team, have a chance to put their stamp on the current generation and will begin their title defence against the Houston Rockets tonight.

Despite that, Cleveland are the heavy favorite to win the East and James, looking to reach a sixth straight NBA Final, insists he is intently focused on leading these Cavs.