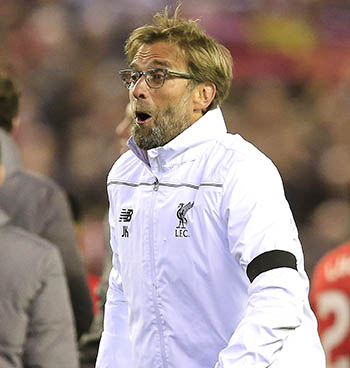 Liverpool: In his first press conference as Liverpool manager last October, Jurgen Klopp said that he wanted to turn the club’s supporters from “doubters into believers”.

The evidence of his side’s thrilling Europa League quarter-final comeback against Borussia Dortmund suggests that he is well on his way.

Liverpool trailed 2-0 and 3-1 at Anfield on Thursday, only for second-half goals from Philippe Coutinho, Mamadou Sakho and Dejan Lovren to engineer a scarcely believable 5-4 aggregate victory that left club stalwarts comparing Klopp to their greatest ever manager.

“When Jurgen Klopp was appointed, everyone in England thought it was a great job,” former Liverpool centre-back Mark Lawrenson, who contributed to five league title triumphs in the 1980s, told BBC radio.

“There’s touches of (Bill) Shankly in there. He’s a really, really good fit and he has raised this average team.”

Ever the romantic, Klopp spoke in reverential tones about Anfield’s “special atmosphere” prior to his first game there against Rubin Kazan in the Europa League in October.

But a drab 1-1 draw played out in front of a hushed crowd dampened some of the early enthusiasm and Klopp was at pains afterwards to assert that he should not be seen as the saviour of English football.

“I don’t think at this moment I should come here and change the world of football,” he said. “I’m not strong enough, not smart enough.”

Six months later, the headlines on the sports pages of Britain’s newspapers yesterday suggested that Anfield has indeed found its new messiah.

“Merseyside miracle,” said the Daily Mirror. “Klopp’s miracle,” was the verdict of local newspaper the Liverpool Echo. The Times called it: “The miracle of Anfield”.

Right from the start, Klopp made no secret of his desire to harness the power of the Anfield crowd.

He was derided in December for leading his players in a salute of the Kop after Divock Origi’s 96th-minute equaliser had rescued a 2-2 draw against mid-table West Bromwich Albion.

But it was all part of his attempts to foster a sense of symbiosis between crowd and team – a strategy that reached a dizzying apogee against Dortmund.

The BBC called it “one of the most dramatic comebacks Anfield has seen”.