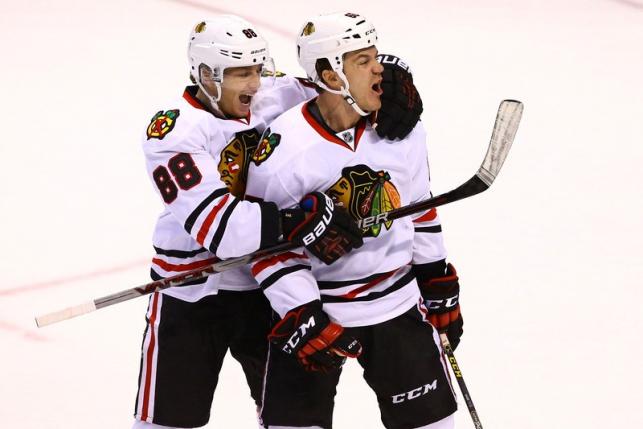 Chicago Blackhawks center Andrew Shaw (65) celebrates with Patrick Kane (88) after scoring a goal against St. Louis Blues goalie Brian Elliott (not pictured) during the third period in game two of the first round of the 2016 Stanley Cup. (Reuters Photo)

Joel Quenneville's decision to make a coach's challenge Friday night might have turned the opening-round series between the Chicago Blackhawks and the St. Louis Blues.

With 7:46 to play in the third period of a 1-1 game, the Blues' Vladimir Tarasenko appeared to score his second goal of the game, putting the Blues on the verge of taking a 2-0 lead over the defending Stanley Cup champions.

Before play could resume, however, the Blackhawks' coach asked the referees to take a look at the play to determine if the Blues were offside.

"Somebody on the bench said it's offsides," Quenneville said. "A player got a coaches' attention and we were able to check it out and get the referee's attention. I was screaming like a mad man."

The review took several minutes but finally determined that Jori Lehtera had been offside on the play by a faction of a step and the goal was disallowed.

A little more than a minute later, Tarasenko was called for slashing Andrew Shaw and with just seven seconds left in the penalty, Shaw knocked in his own rebound to put the Blackhawks up 2-1 with 4:19 to play in regulation.

An empty-net goal by Artemi Panarin made it a 3-1 lead for the Blackhawks before Kevin Shattenkirk scored with just two seconds left to make it a 3-2 final in favour of the Blackhawks, tying the series at one win each.

The series now moves to Chicago for the next two games, with game three set for Sunday afternoon.

The Blues were naturally upset by the referee's ruling after the play had originally been called a good goal on the ice.

"When you play the defending Cup champions you are going to have to fight through a lot of stuff," said coach Ken Hitchcock. "That's the way it is. I've been on the other side of things. Calls are not going to go your way, you are not going to get the officiating you want. It's always going to seem like it's one-sided. Big deal. Fight through it.

Blues' captain David Backes said he had looked at the replay and was not certain what the proper call should have been.

"It's a play where it's a critical time in the game and you hope they are 100 per cent sure of what they saw," Backes said. "The puck kind of disappears behind Jori and there was a skate in the air, where's the puck, all those things.

"I'm obviously a biased individual in what I think happened but the unbiased guy said, and he had plenty of time to look at it, that it was offsides."

Quenneville said the longer the review lingered the better the Blackhawks felt about their chances of having the call overturned, but Duncan Keith still wasn't sure what was going to happen.

"You don't like it when it works against you and you like it when it works for you so we caught a break there," Keith said. "That's the rule so it was what it was and it was nice to get that power play goal at the end. I'm sure they're unhappy about it but that's the rule. We were just happy to get on the power play there after they hit the stick there and broke the stick so it's a tough game out there and could have went either way but I thought it was nice to find a way to win."

Shaw's goal actually was reviewed too, first to see if the puck was across the line, and then when the Blues challenged that there had been goalie interference on the play. They lost that call as well.

"I was pretty sure it was a goal," Shaw said. "We knew we had to step on the throttle (after the overturned goal) and we did."

It was Keith's goal off a faceoff with just four seconds to play in the second period which tied the game for the Blackhawks after St. Louis goalie Brian Elliott, who had the 35-save shutout in game one, had stopped Chicago's first 18 shots in this game.