Britain's Prince William and his wife Kate, the Duchess of Cambridge arrive at the Centre for Wildlife Rehabilitation and Conservation (CWRC), at Panbari reserve forest in Kaziranga, in the north-eastern state of Assam, India, April 13, 2016. (AP Photo)

Prince William and his wife Kate look at a baby Rhino at the Centre for Wildlife Rehabilitation and Conservation (CWRC), at Panbari reserve forest in Kaziranga (AP Photo)

The Royal couple pose for photo during their hike to the Tiger's Nest Monastery, near Paro, Bhutan, Friday April 15, 2016, during day six of the Royal tour to India and Bhutan. (AP Photo)

New Delhi: Prince William and his wife Kate will wrap up their trip to India and Bhutan on Saturday with a visit to the Taj Mahal that carries poignant echoes for Britain's royal family.

When the late Princess Diana was photographed sitting alone outside the tragic monument to love in 1992, it sparked much media speculation and later became a symbol of her failing marriage. 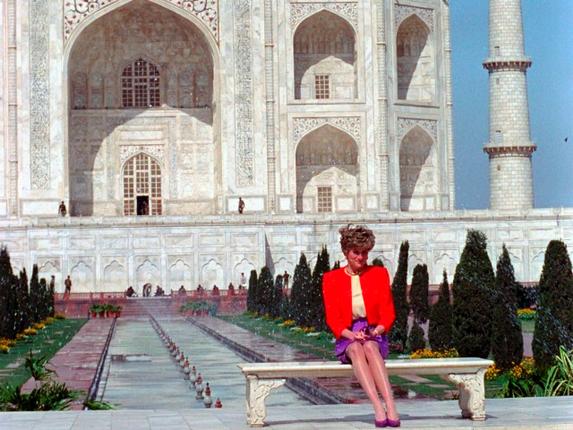 India's most famous landmark holds a special significance for the young royals, with Kensington Palace saying Prince William feels "incredibly lucky" to visit a site where his mother's memory is so alive.

It follows a whirlwind week that saw the Duke and Duchess of Cambridge feed baby rhinos in northeastern Assam and trek to a mountain monastery in Bhutan - retracing the footsteps of Prince Charles.

When they reach Agra, home of the Taj, waiting for them will be a 73-year-old fan whose family memories stretch back even further, to the visit of Queen Elizabeth II in 1961.

"I have been dreaming of meeting the Duke and Duchess of Cambridge ever since I got to know they would be coming to the Taj," Surendra Sharma told AFP.

In one, the Queen is shown dressed in an elegant overcoat and a knee-length dress, sitting next to her husband in an open-top car.

Sharma may have reason to hope -- in Mumbai, the couple took time out from engagements to meet with a 93-year-old admirer, Boman Kohinoor.

The Britannia & Company restaurant owner became the star of a social media campaign that saw arrangements made for him to meet the royals at the last minute.

Agra wore a festive look Saturday, with roads decked out in fairy lights and flowers as it prepared to welcome the high-profile guests.

Security has been beefed up around the monument, with several paramilitary personnel standing guard with sniffer dogs.

The Duke and Duchess will arrive in a private jet before heading out to the Taj, a UNESCO world heritage site, after lunch.

The mausoleum is currently undergoing renovation work, with scaffolding covering two of the minarets -- and a senior archaeological official told AFP it would not be dismantled for the visit.

It marks the final stop on a hectic itinerary for the royal couple, on their first official trip to the country that the British ruled for close to 200 years.

Their whistlestop tour has seen them hobnob with Bollywood stars in Mumbai and meet Prime Minister Narendra Modi for lunch at a former palace in New Delhi.

They then spent two days in Bhutan, meeting the king and the queen of the remote Himalayan kingdom, trying their hand at the national sport of archery, and taking a mountain hike.

The couple are set to return to England on Sunday in time for the Queen's 90th birthday on April 21.

Crafted in white marble and inlaid with precious stones, India's most famous monument was built between 1631 and 1648 under Mughal emperor Shah Jahan, in memory of his favourite wife, Mumtaz Mahal.