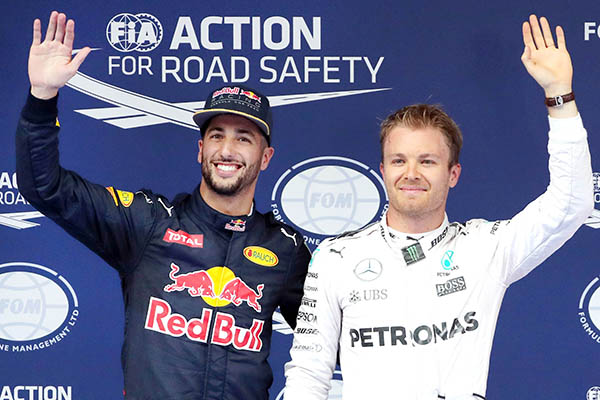 SHANGHAI: Daniel Ricciardo believes Red Bull can give Ferrari a run for their money as they all chase race favourite Nico Rosberg in today’s Chinese Grand Prix.

The Australian’s late surge saw him qualify second behind Rosberg yesterday, helped by some mistakes by Ferrari’s Kimi Raikkonen and Sebastian Vettel, who occupy row two.

“Today is encouraging,” said Ricciardo, who finished fourth in the season’s first two races in Australia and Bahrain - both won by Rosberg.

“If we can have this on one lap then in the race we should still be pretty competitive. We’re normally better off in the race. I hope to have a race with Ferrari.”

Ricciardo’s performance surprised even himself, with Red Bull team chief Christian Horner putting it down to the Australian’s new “go-faster haircut”.

“Second is pretty awesome,” he said after securing his first front row since China two years ago. “It feels good to be back here. We didn’t expect this!”

Mercedes team boss Toto Wolff also admitted Ricciardo, who scored all three of his Formula One victories in 2014, had caught everyone by surprise.

“That kind of came out of nowhere,” he said. “We know of Daniel’s qualities, he’s been impressive. But he wasn’t on the radar until Q3 and there he was - P2.”

Red Bull team-mate Daniil Kvyat starts on the third row and Ricciardo predicted they could be in the mix at the business end of today’s race.

“We have to try to keep this going,” said the 26-year-old. “We’ve only had a couple of races, but up until now we’ve exceeded, maximised everything we’ve got, and we’ve shown true dry pace here.

“To get a front row in dry conditions is awesome,” he added. “It’s testament to how far we’ve come since the end of 2015. I know it’s only qualifying, but the plan is to be back here after the race.”

Ricciardo admitted he had struggled earlier during qualifying, which was delayed for 20 minutes after Pascal Wehrlein’s Manor crashed into a wall moments into the first session.

“It didn’t seem like we were going to be in the fight for the front few rows today,” he said.

“But I found a bit more speed, although the super-soft is a tricky tyre to manage - it gets chewed up quite a bit as the lap goes on.

“Nico, starting on the softs, should be in good shape but if we can battle for the podium, that will be awesome.”