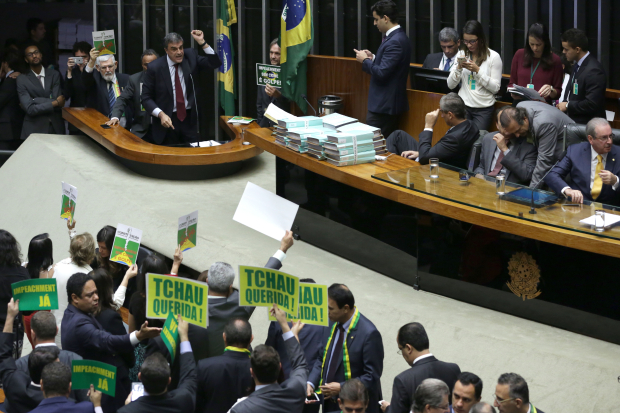 Brasília: Brazil's lower house of Congress is set to vote Sunday on whether to authorize impeachment of President Dilma Rousseff, bringing to a head a crisis that has paralyzed and divided Latin America's biggest nation.

Police were out in force across major cities in preparation for what were expected to be large rallies of both Rousseff supporters and opponents, with fears that the bitter atmosphere could fuel violence.

In the capital Brasilia, Rousseff, 68, and her allies lobbied frantically in an 11th hour effort to turn a tide that appeared to be going against the country's first female president.

The opposition needs 342 votes of the 513-seat lower house of Congress, or two thirds, to send Rousseff to the Senate for a trial that could end in her being forced from office. Anything less and Rousseff would record a famous victory.

Rousseff is accused of illegal accounting maneuvers to mask government shortfalls during her 2014 reelection. Many Brazilians also hold her responsible for the country's worst recession in more than a generation, and a massive corruption scandal centered on state oil company Petrobras.

However supporters of the leftist president continued to insist that they would scrape through.

With deputies bargaining loyalty in exchange for government posts and an unknown number of them simply hedging their bets for as long as possible, it was possible that decisions could change.

Already late Saturday protesters, dressed in the red of Rousseff's Workers' Party or draped in Brazil's yellow and green colors if from the opposition, gathered in Rio de Janeiro, Sao Paulo and Brasilia.

During the voting on Sunday, as many as 300,000 demonstrators were expected to descend on the esplanade outside Congress where a long metal barricade was erected to keep opposing camps apart.

If Rousseff is defeated on Sunday, the Senate is expected to vote to open a trial, probably in May, at which point she would have to stand down for 180 days while her vice president turned opponent, Michel Temer, becomes interim president. Another two-thirds vote in the Senate would oust her.

"We're here to defend democracy," said Lucy Lopes 43, a history professor protesting in favor of Rousseff in Brasilia ahead of the vote.

The president, who was imprisoned and tortured under Brazil's 1964-1985 military dictatorship, has branded the impeachment push as "coup," an accusation that resonates with her base.

"They want to convict an innocent woman and save the corrupt," Rousseff said Saturday. "What's their legitimacy?"

However, opponents say Rousseff and her predecessor Luiz Ignacio Lula de Silva have presided over more than a decade of mismanagement that has crippled the country.

And they blame the duo for the Petrobras scandal in which a cartel of executives and politicians robbed the giant corporation through inflated contracts, even if prominent figures on the pro-impeachment side have themselves been implicated.

"These are the people against corruption," said Lilian Cristina de Claris, 45, who had come to Brasilia from Sao Paulo to attend an opposition rally.

The lower house was due to start its session at about 1700 GMT then begin the vote shortly after. Voting was to be one deputy at a time and live on television, with each deputy given 10 seconds to make a statement.

Lula, who has spearheaded attempts to save Rousseff, said negotiations to secure support from undecided deputies were "like the stock market."

In an indication of the intensity of the contest, Rousseff canceled a planned public appearance Saturday to concentrate on the negotiations, while her arch rival Temer also changed his plans to spend the day in Sao Paulo, instead rushing back to Brasilia.

A leading opposition lawmaker, Mendonca Filho, told AFP that he was confident of getting the 342 votes. "But we can't imagine that it will be easy," he said. "We have to remain vigilant."

The opposition also accused Lula of trying to "buy deputies" and demanded a police investigation.

Reflecting heightened tension, authorities deployed more than 4,000 members of the emergency services in Brasilia to separate rival protesters, who will also be divided by a long metal barrier that has rapidly become a symbol of the split in Latin America's largest and most populous country.